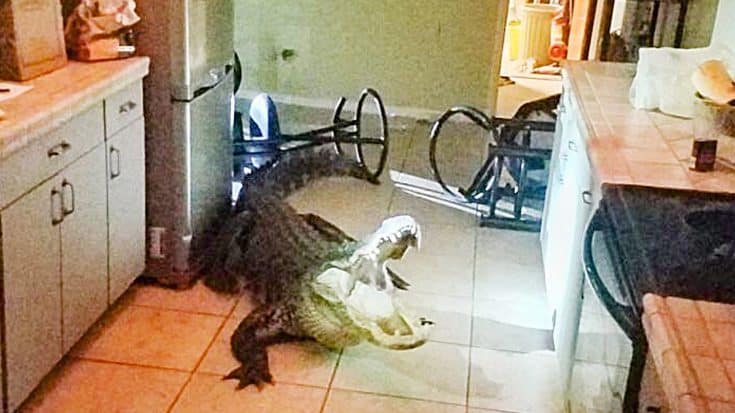 A homeowner in Clearwater, Florida woke up to an 11-foot alligator smashing through their kitchen like a wrecking ball on Friday (May 24th, 2019). Apparently, the gator found a way into the home by breaking a small window low enough to the ground for him to fit through.

The report from Fox News said, not only did the gator bust through the window, but it destroyed the kitchen table and a bunch of bottles of wine. It broke in about 3 AM in the morning and woke up the homeowner who quickly called the Clearwater Police Department (CPD).

CPD posted to their Twitter, “See you later, alligator. A scaly 11-foot-long gator broke into a Clearwater home overnight through some low windows in their kitchen. Clearwater Police officers and a trapper responded to the scene to capture and remove the gator. There were no injuries.”

Fortunately, nobody was hurt in the event and thankfully she didn’t have any pets because it could have easily taken out any dog that tried to mess with it. The police were able to contact a trapper who safely captured the creature without hurting it and removed it from the home.

The homeowner was more surprised than scared because alligators don’t normally break through windows to get to what they are looking for. Since then they have boarded up the low windows. The homeowner gave an interview explaining the story from her experience.

A giant 11-foot long alligator broke into a woman’s home in Clearwater, Florida! Could you imagine waking up to that!?!? https://on.wtsp.com/2Mi4UcZ

Mary the homeowner said, “I give compliments to all the policeman. They handled it well, they handled me well, and the guys who came to take it away did an excellent job.”

Mary went on to say she was impressed by how they took him out of the house and tied his hands back while the gator was trying to fight them. She said as they were removing it, the gator bent the refrigerator and put holes in the wall with its tail.

Even one of the policemen got smacked with its tail as they were removing it. What a story! What would you have done?