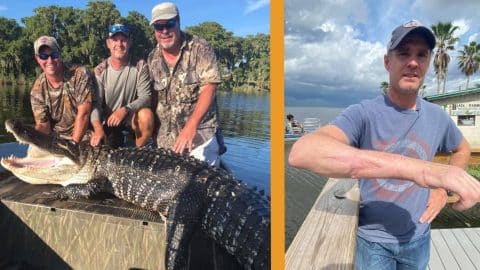 Lt. Carsten Kieffer, a firefighter in Lake Mary, Florida working for Tavares Fire nearly got his arm ripped off by an alligator when he went hunting last summer.

Carsten was with his paramedic buddy Randy Matheny and Randy’s dad when the incident took place. He said it was around 5pm in the afternoon when they spotted a massive 12-foot gator and stopped to harvest it.

They’ve been on dozens of hunting trips with no injuries before but this time they got a little too comfortable with a creature was a little too big for them to handle. Carsten said he harpooned the animal as they rode over him on the boat. It then launched from the bottom of the lake into the boat.

The gator bit down onto Carsten’s arm and Carsten said, “Randy’s dad was able to grab my belt and just hold me in the boat and make sure I didn’t get pulled in the water, and Randy was able to get a rod and put it in the gator’s mouth and pry it open.”

Randy, however, wasn’t able to pry the gator’s mouth open and it was at that point when they heard his skin ripping and bone in his arm being crushed.

He grabbed his wrist and for some reason the gator, fortunately, let go. The men quickly motorboated him to someone’s backyard where he was later picked up by an ambulance that transported him to a hospital.

“I gave them the information they needed and then I asked them to knock me out because at that point, I just kinda done dealing with it,” Carsten said with a laugh.

The doctors told him that he wouldn’t be able to use his arm as he used to and he told them he believes he’ll do better than they think.

The incident happened back in August and since then he’s been through multiple surgeries and is now able to move his fingers and is showing signs of improvement in all areas.