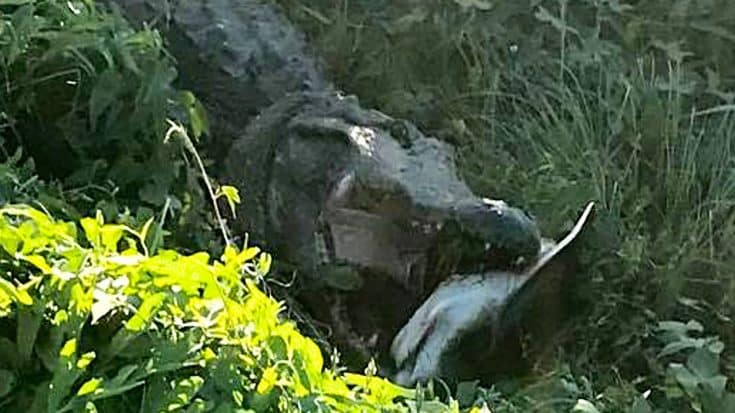 A giant alligator was spotted by Sandy Traub around 6 pm on September 19, 2020, eating what appears to be a shark at the Savannah National Wildlife Refuge in Georgia.

Alligator Chewing On Something

Sandy took a few pictures of the unusual sight and posted them to Facebook which had many people questioning what the gator was really chewing on. Some thought it was a softshell turtle while others were convinced it was a shark.

She mentions when she first saw the alligator she thought it was dead because it wasn’t moving so she figured she’d take a picture of it. That’s when it started to move and she saw it had a large fish, shark or turtle in its mouth.

“His mouth and eyes were wide open, not moving. Something big (shark, big fish, turtle) is in his mouth. He maneuvered to turn around in the reeds and went into the water with his prey.” she wrote on Facebook.

The Gator Scurried Away

The gator turned around so fast it made Sandy’s heart skip a beat as it scurried off into the water. Her son Mike commented on her photo talking about how she “almost jumped outta her skin when she saw just how fast that big boy turned around & acted like a motorboat to get to the water with its meal.”

Sandy responded to a Facebook user about Mike’s comment, “Mike said I jumped out of my car seat when he started turning! Before backing the car I had momentarily considered getting out and walking back to get a decent camera angle.”

It’s definitely not normal to see an alligator eating a shark but it does happen. Sandy only took pictures and no video was ever recorded on it but there is one YouTuber you can watch in the video below who discusses which animal is more deadly, the shark or the crocodile.