Alligator Spotted Swimming With Big Knife Stuck In Its Head 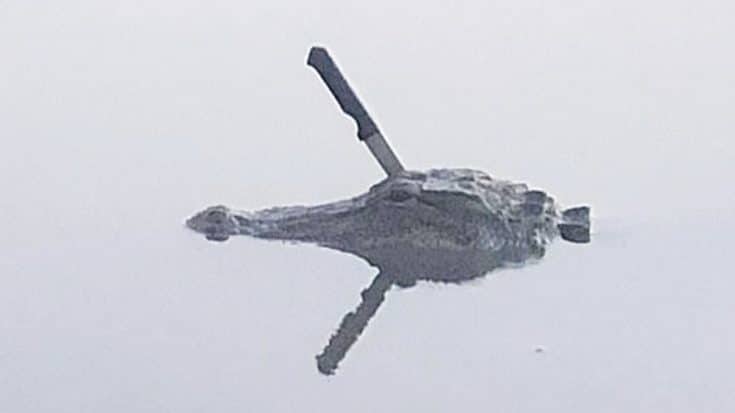 It was an early morning in Sugar Land, a suburban area in Houston, Texas when Erin Weaver, a resident of the neighborhood saw an alligator swimming with a massive knife stuck in its head.

A Texas woman who took a photo of a live alligator with a knife in its head said she and her neighbors are concerned about the animal's well-being pic.twitter.com/eAJO0uEfwF

“I saw him swimming and then I saw him turn, like swimming towards me, and I saw something sticking out of his head. It looked like a steak knife.”

In total shock at what she saw she quickly took out her phone to capture a picture of the creature before it dipped back under the water. The area where it was swimming at is called Orchard Lakes Estates and the community is used to coexisting with the reptiles but have never had a problem with them being aggressive towards humans.

“I feel that somebody did this on purpose,” Erin said. “I can’t imagine this animal going after somebody that they would have to defend themselves, because we’ve never had that happen before.”

Community Mobilized To Help It

Erin shared the picture with KTRK who covered the story first and the images have been widely shared over social media since then. Getting the word out got the community mobilized to figure out who did this and how they can help remove the knife from the gator.

“I want to get help for this alligator,” Erin said. “I don’t want to see an alligator swimming around with a knife in its head and suffering.”

Unfortunately, the gator disappeared under the water before anybody could do anything about it but the neighborhood is on the lookout for it. Hopefully, they can find it and help the poor thing.

Watch the full interview in the video below.