Amazon Driver Reunites With Family She Saved During Pitbull Attack 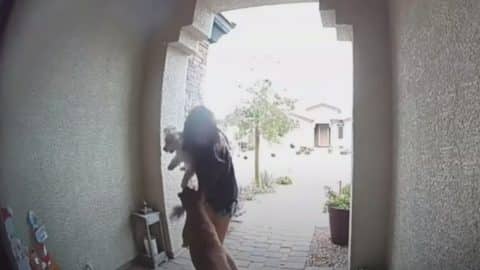 The unknown Amazon delivery driver who saved a family dog from being attacked by an aggressive pitbull last week has finally been revealed to be employee of the month, Stephanie Lontz from Las Vegas.

Stephanie drove back out to meet up with the family upon their request so they could thank her in person for saving them because they did not get the chance to do so on the day of the attack.

19-year-old Lauren Ray who was present during the attack and her father Michael who was watching everything go down in real-time on their home Ring security camera was very happy to greet Stephanie with hugs and statements of gratitude.

Stephanie explained to FOX5 Las Vegas that she was making her routine routes delivering packages in a neighborhood when she heard the screams for help from a nearby home. She ran over there to see the exhausted 19-year-old struggling to hold her small dog Max high enough in the air to keep the pitbull from mauling him to death.

The dramatic doorbell footage showed Stephanie running over to Lauren and putting herself in between the small dog and the pitbull.

She tells Lauren to go back into the house while she used her legs to create a barrier to block the pitbull while they got away.

It certainly worked! However, Stephanie promptly ran off after the attack to continue delivering her packages because she was still on the clock.

The tense video was eventually shared on social media and news outlets and went viral within hours, getting millions of views.

The footage got so much attention in fact that the word got out and Stephanie was finally revealed to be the hero who saved the day. When she met back up with the family, other Amazon workers and mail couriers joined in with a surprise celebration of her bravery.