By Manly Bryant on June 1, 2021
Advertisement 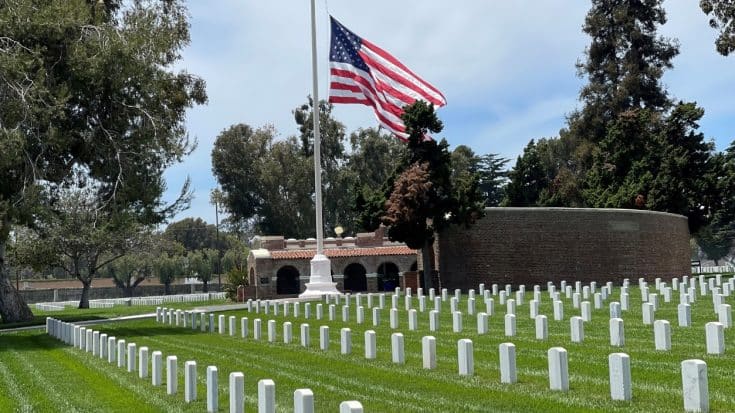 This past Memorial Day weekend, many Americans around the nation honored the men and women in the military who have made the ultimate sacrifice by spending time at their graves and decorating them with flowers, flags, and memorabilia.

After many volunteers spent the entire weekend getting graves ready for Memorial Day on Monday, someone snuck into the cemetery and stole a lot of the decorations.

Veterans Affairs said sometime during Sunday night and early Memorial Day morning, before it was daylight outside, a huge American flag and several other smaller flags were stolen from the Los Angeles National Cemetery.

Investigators said that the Southern California veterans cemetery’s gates were closed when the flags were stolen, including one American flag stretching a gigantic 25 feet by 30 feet long. A spokesperson for the Department of Veterans Affairs’ National Cemetery Administration, Les’ Melnyk was saddened by the disrespectful crime.

Military reported Les’ saying the crime “cannot detract in the slightest way from the honor and respect we pay on this Memorial Day to those service men and women who made the ultimate sacrifice for our nation.”

According to a volunteer worker at the Los Angeles National Cemetery Support Foundation, Rebekah Adams, it takes three people to take down the huge flag, so there were possibly more individuals involved in the raid.

“It’s so sad and shocking something like this would happen on Memorial Day,” Rebekah said.

The cemetery is run by the Veterans Administration and was built back in the 19th century. They say that the investigation will continue as they try to gather more information on who it could have been.

Veterans Speak About The Crime In The Video Below