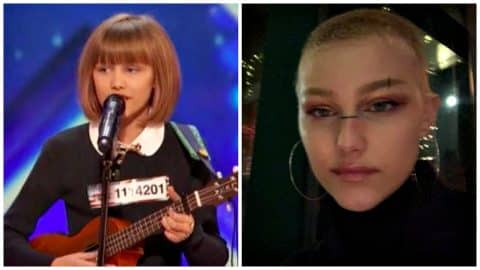 Grace VanderWaal was only 12-years-old when she (and her ukulele) took home the America’s Got Talent crown in 2016. Her girl-next-door looks and realness endeared her to millions of fans around the world. The now 16-year-old has fans buzzing after debuting a dramatic new look.

In a post made to Instagram on December 4, VanderWaal debuted a buzz cut and footage of her friend doing the honors of cutting her hair.

Several more posts were made in the days that followed that showed off Grace’s new look.

The singer-songwriter made her America’s Got Talent debut during the show’s 11th season with her original song, “I Don’t Know My Name.” She immediately won the hearts of America and the judges with her huge smile and sweet countenance. When judge Simon Cowell asked VanderWaal if she had the support of her friends from school, the then-middle-schooler admitted that most of her friends didn’t even know she could sing and that they had no idea she was auditioning for the show.

As Grace began to sing, it was obvious that she was completely unaware of the depth of her talent. She couldn’t help but smile when the crowd started clapping for her just moments into her performance. After a lengthy standing ovation, judge Howie Mandell gave Grace the second golden buzzer of the season, sending her straight to the live quarterfinals. Hard-to-impress Simon Cowell called VanderWall “the next Taylor Swift.”

“This is a show about surprises,” Mandel praised. “I think you are a living, beautiful, walking miracle. Your original song about people not knowing your name … I think the world is going to know your name.”

VanderWaal went on to win the season, and has built quite a resume in the years since. She has performed on some of the worlds biggest stages, won Billboard awards and starred in a movie called “Stargirl.”