By Manly Bryant on December 19, 2018
Advertisement 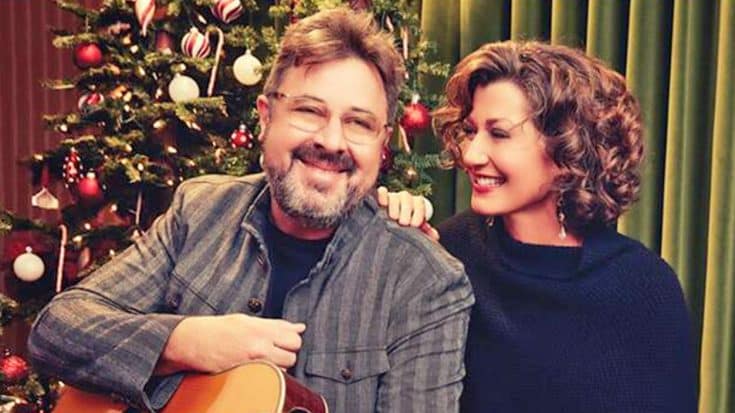 Every year, couples scurry around department stores and online sites desperately seeking the best Christmas present for one another. From perfume to jewelry and everything in between, couples admit shopping for a significant other is no easy task. Well, even some of our favorite country couples deal with the struggles of finding the perfect gift too. Vince Gill‘s wife, Amy Grant gushed over the one time she actually did find the perfect present.

Their love story begins in 1993. The couple met up to record a video for their duet “House of Love” off of Grant’s album. According to the two singers, it was love at first sight. In an interview with ABC News, Grant gushed about her now husband,

“I think that a part of me loved him instantly. I feel like I knew him instantly. I was so moved by him as a human being that I went up behind him and just hugged him as hard as I could while he was singing. I just said, ‘I just needed to hug you all night.'”

Luckily, Gill felt the same way. So much so that he even wrote his beautiful song “Whenever You Come Around” inspired by Grant. Gill admits he couldn’t get Grant or her smile out of his head. On March 10, 2000, the two tied the knot. Shortly thereafter, the couple gave birth to their first child together, Corrina, adding to the four kids they had from previous marriages.

After 18 years of marriage, Grant admits that she still struggles with gifts for her husband though. While talking with PopCulture.com she explains how her country husband rarely gets excited over presents, as he’s more of “an observer.” The singer did recall the one time she got her hands on the best and most personal present yet.

It all stemmed from one of Gill’s favorite songwriters, Guy Clark. Gill was on the original session of “Randall Knife,” a song that touched the hearts of everyone involved in the making. When Gill was 40, his father passed away, which resurfaced the emotions that the song is written about. As Grant saw how special the heartbreak melody was to her husband, she made a call to Clark asking for a hand-written lyric to “Randall Knife.”

Grant patiently waited for the package to arrive from Clark, expecting just what she asked for. Until a manila envelope showed up on her doorstep and nearly left her in tears.

“He had with a blade, cut out of his composition notebook the two pages, which meant that whatever songs were on the backs of those pages – because you know in a composition notebook, you write on the two facing pages – and he had cut out the original lyric. I nearly wept. We have it framed in our home.”