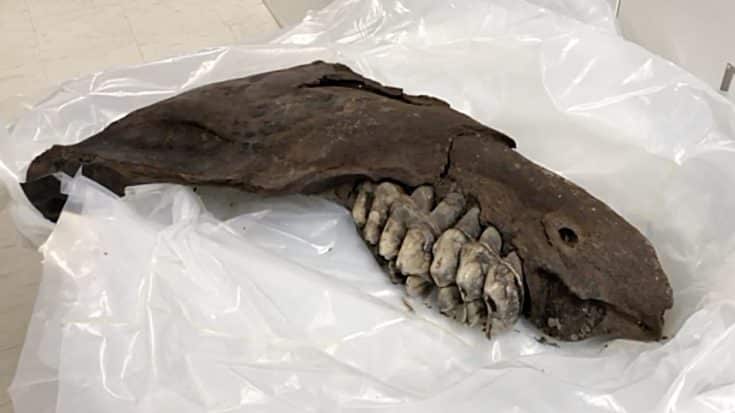 It was an exciting time for a young farm boy in Iowa this past Saturday (May 11th, 2019) when he stumbled upon a 20-inch jaw bone belonging to a Mastodon. The kid and his family, not wanting to be named so fossil hunters wouldn’t come on their land looking for bones, gave the fossil to the University of Iowa (UOI).

“We were notified a couple of weeks ago that somebody had found a fossil in the middle of a small river on the property,” Tiffany Adrain from UOI told WHO-HD Channel 13. “It was actually a high school student who had found the object, and the landowners contacted us and notified us [and] sent us photographs. Now we could tell right away it was a jaw bone of a Mastodon. A Mastodon is an extinct, large, hairy elephant.”

This past Saturday, a University of Iowa paleontology team was on a farm in southern Iowa to pick up the bone of a prehistoric mastodon.​ https://t.co/LtoNzvmEJ0

How They Knew It Was A Mastodon

Apparently, at first, they thought it was a Woolly Mammoth because about 30 years ago the same people who owned the land reported they found other bones of a Woolly Mammoth. But this time, these fossils were different.

“So perhaps our identification of Mammoth was incorrect. We rushed to the cabinets, we carefully lifted out the bones, took some photographs of them and sent them to a specialist,” Adrain said. “Right away you know it’s mastodon because of these teeth.”

History Of The Mastodon

A Mastodon is a prehistoric hairy elephant that became extinct about 10,000 years ago. According to researchers, the jaw bone they found in Iowa was from a 7-foot tall young Mastodon. Both Woolly Mammoths and Mastodons are ancient relatives of the modern day elephant. Mammoths appearing about 5.1 million years ago in Africa while the Mastodon appeared about 30 million years ago in North America.

They believe the Mastodon traveled to America across the ancient land bridge that used to connect Russia and Alaska together and made their way down to Ohio and northwestern Kentucky.

The Mastodon jaw bone was taken to a repository located on the University of Iowa campus to be with all the other large mammal fossils found in Iowa. The repository holds many fossils that include giant beavers, sloths, camels, short-faced bears, horses, and bison.

It was truly an amazing find by the boy and the state of Iowa. These fossils will be studied further over the weeks by the science community.