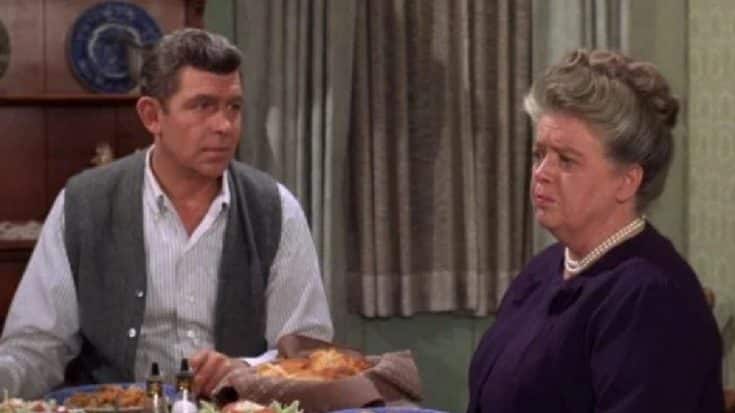 It’s been more than 60 years since The Andy Griffith Show premiered on CBS. The show’s unforgettable characters cemented their places in television history and in the hearts of generations of the show’s fans. But, behind the scenes, some of the actors didn’t get along as well as their on-screen characters did.

Set in Mayberry, North Carolina, The Andy Griffith Show ran for eight years and starred Griffith as small town sheriff Andy Taylor. He was joined by his dim witted yet charming deputy, Barney Fife played by Don Knotts, Taylor’s son Opie, portrayed by a young Ron Howard, and Taylor’s Aunt Bee, played by Frances Bavier. Along with the rest of the show’s cast, including Floyd the barber, Otis the town drunk, gas station attendants Gomer and Goober Pyle and many more, the Taylor family represented a closeness of family and community that represents many small towns across the country.

When cameras weren’t rolling, at least one of those characters was known for being hard to work with. Frances Bavier, America’s favorite aunt, had a reputation of being easily offended and didn’t appreciate the role that made her a household name.

“You can’t be an actress for 40 years, living in a world of make-believe, and not be affected,” she told the Star-Gazette of Elmira, New York, in 1966. “Sooner or later, your mind begins to click and in my case you are wise to seek professional help to help stop being Aunt Bee after work. It’s terribly difficult, because Aunt Bee is so much nicer than the real me. Unlike plays in which you play a character only a couple of hours each night, you must be a television character 12 hours a day. And even when you go home, people don’t recognize you as you, but for the character you play. It can be awfully confusing.”

Bavier reportedly only clashed with Griffith on set, but had great respect for him and his role in making The Andy Griffith Show a success. But, by the time the cameras stopped rolling and the show wrapped in 1968, Bavier was one of the few stars who appeared in the show’s spinoff, Mayberry R.F.D., making her one of the longest lasting characters from the franchise.

Andy Griffith himself admitted that he and Bavier often clashed during filming and didn’t stay in contact after the end of The Andy Griffith Show. But, Bavier did reach out to Griffith one final time before her death in 1989.

In an interview with Ralph Emery, Andy Griffith revealed that Bavier had contacted him after finding out that she had cancer and apologized for being so difficult to work with.

While Frances Bavier had many other acting roles to her credit, she will always be Aunt Bee to us and to the millions of fans who loved her and The Andy Griffith Show.

Watch Andy Griffith talk about his final visit with Frances Bavier in the clip below.