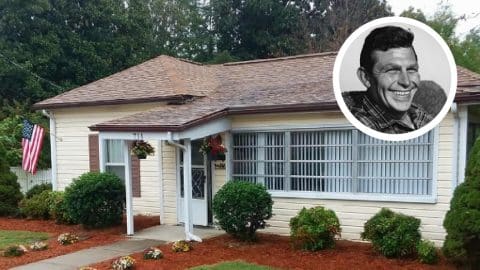 We can think of few things that would be more nostalgic than sleeping in the very home that legendary actor Andy Griffith grew up in. When planning our summer vacation, this stop is definitely going on our bucket list.

Griffith was born and raised in Mount Airy, North Carolina. The town is believed to be the inspiration for the fictional town of Mayberry in The Andy Griffith Show, a show in which the actor starred for eight seasons from 1960 to 1968.

But, Griffith’s childhood was far from ideal, although it helped shape his successful entertainment career. Griffith was born in 1926 and was the only child of Carl Lee and Geneva. The family was poor and lived with relatives until his father could afford to buy a home. When Andy was 3-years-old, Carl Lee started working as a carpenter and was able to purchase a home for his family, although it was on the “wrong side of the tracks,” a circumstance that led to Griffith being bullied in grade school.

Andy’s used music and drama to help cope with the bullying. His love for the arts grew as he entered high school, and under the leadership and encouragement of his minister, Griffith learned to play the trombone and sing.

It was during these formative years that Andy Griffith lived in the modest two-bedroom home at 711 E. Haymore Street in Mount Airy. The current owners have opened the home for fans of the actor to rent nightly for roughly $200/night, price depends on the season.

According to reviews from previous guests, the Griffith home is a short walk to historical downtown Mount Airy where a Mayberry replica courthouse and Floyd’s Barber Shop are located. The home is decorated in the style that it would have been when the Griffith family occupied the house decades ago.

If staying in Andy Griffith’s old home isn’t enough, squad car tours of the town are available as is a photo op at the Mayberry Courthouse, a replica of the courthouse that appeared in The Andy Griffith Show during the 1960s. Fans of the show can sit behind Andy’s desk, type on the vintage typewriter, and sit in the recreated jail cells that appeared in the show.

Take a tour of Andy Griffith’s childhood home in the video below and make reservations to stay in the historic home here.