Angry Mama Rabbit Fights Snake After It Attacks Her Babies

By Manly Bryant on July 3, 2019
Advertisement 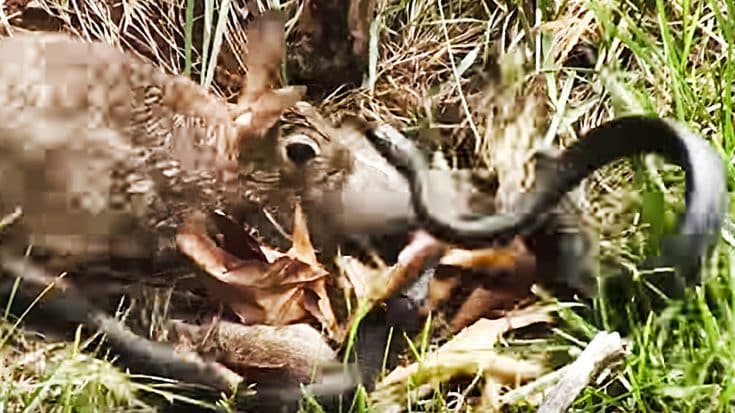 The statement “never come between a mother and her babies” can be fully verified in this video that surfaced on the Internet showing a mama rabbit coming home to find a snake in the process of killing her babies.

Apparently, a family noticed out their home window a big black rat snake constricting three baby rabbits and so the dad got his camera and began filming it. The snake had already killed two of the babies and was working on killing the last one.

That’s when the mama rabbit returned to her nest and saw what was going on. She completely FLIPPED OUT and did a massive hop onto the snake and began biting it. At this point, the snake realized he messed up, big time, and let go of the last surviving baby.

She Goes Berserk On The Snake

The snake quickly attempted to slither away while the mom looked over her two dead babies that weren’t so lucky. After she realized they were dead she went berserk on the snake – biting it, pinning it down and aggressively kicking it with her back legs.

Every time the snake tried to slither away, the mom pulled it back and gave it another beat down. It’s a wild scene to witness and you can hear two adorable kids in the background (probably less than 5 years old) doing the commentary for the fight.

Watch the full fight scene in the video below!