“Angry” Octopus Jumps Out Of Water To Attack Swimmer

By Manly Bryant on April 5, 2021
Advertisement 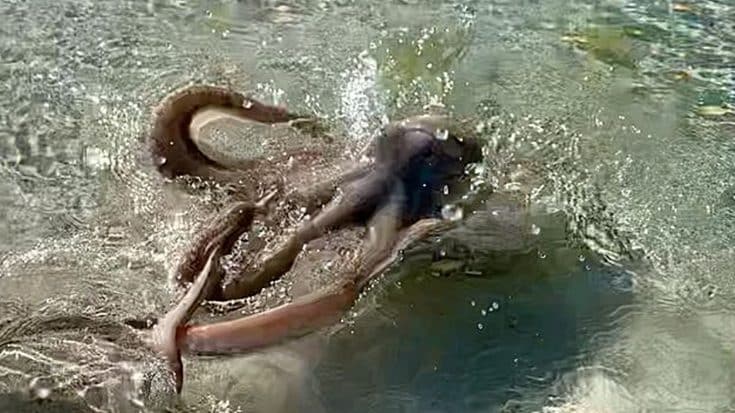 Geologist from Perth, Australia, Lance Karlson, was enjoying a day at the beach with his daughter when he spotted something jumping out of the water trying to strike a seagull.

As he and his daughter got closer to investigate, he realized it wasn’t a stingray like he thought, it was an angry-looking octopus crouched down in the shallow waters. Lance got out his camera to take a video of it since it’s not every day you see an octopus in the wild.

Curious and fascinated, Lance leaned toward the sea creature to get a closer video of it, but that was a little too close for comfort for the sea creature. Within a fraction of a second, the animal lunged out of the water and tried to smack him with its tentacles. It was actually quite impressive.

Lance Karlson shared the video on Instagram and wrote, “The angriest octopus in Geographe Bay! After going after a seagull it then decided my daughter and I deserved a lashing! I later discovered its home amongst a crab graveyard, where it came after me again!“

Lance said later he went into the ocean alone to swim around for a bit and the octopus came and found him and attacked him again – this time actually hitting him with its tentacles lashings and leaving him dazed and confused in murky water.

“My goggles became fogged, the water was suddenly murky and I remember being shocked and confused,” he said, according to Alarabiya News.

Lance swam back to the beach as fast as he could and noticed raised imprints from the tentacle lashing across his arm, neck and upper back. He said he didn’t have any vinegar to pour on the sting so he used cola instead and it stopped the stinging.

“This was clearly the octopus’s domain,” Lance wanted people to know.“I am worried that people will view octopuses in a different light. They are amazing creatures that clearly have some strong emotions just like us!”