By Manly Bryant on August 27, 2021
Advertisement 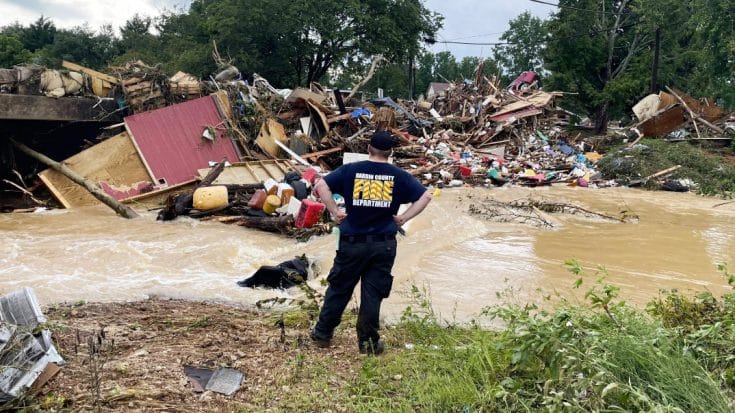 One person generously agreed to pay for the funerals of 20 people killed during the devastating floods that swept through Middle Tennessee last weekend.

More than 17 inches of rain fell on the area in under 24 hours – which is the highest recorded one-day rainfall record for the state.

MAJOR (Historic) flash flooding this morning across Houston, Humphreys, Dickson & Hickman Counties in Tennessee. This is the view from Waverly, Tennessee where an estimated 8-12"+ of rain has fallen.

Officially, this was the deadliest flood event in the history of Middle Tennessee, according to Krissy Hurley with the National Weather Service.

Among those who were killed was Loretta Lynn’s ranch foreman, Wayne Spears. The country singer’s ranch where Spears worked was hit hard by the floods and has suffered a great deal of damage – as have thousands of their neighbors.

Lynn’s daughter, Patsy, shared the news of Spears’ passing on Facebook (below).

The anonymous donor approached local funeral home manager William Brown. He told The Tennesseean that the man had walked into the Humphreys County Funeral Home and paid for nine of the funerals that they are organizing.

Brown also noted that this generous and kind-hearted person traveled to other funeral homes in Middle Tennessee to pay for more funerals of flood victims.

Absolute devastation this morning in Waverly, Tennessee from major flooding last night. Local reports of over 17” of rain was observed. Photos from the Hardin County Fire Department. As of 8pm last night there were 10 confirmed fatalities and 31 missing. #TNwx pic.twitter.com/YZWZ317wQ4

Waverly, Tennessee was hit hardest by the raging waters. Donations totaling hundreds of thousands of dollars have come rolling in from people all over the country to help those who have been affected by the floods.

Homes throughout Waverly were destroyed, damaged, and completely swept away by the immense force of the floodwater. Many people lost their lives as they were unable to escape and were also swept away.

911 calls filled the local switchboard as trapped residents called for help during the flood and one young father was unable to save his 7-month old twins who were swept away.

A GoFundMe for the twins has raised more than $100,000 and many local Tennessee businesses have donated to help with disaster and recovery aid.

The NFL’s Tennessee Titans have donated $50,000, and Regions Bank has also given $50,000, while local manufacturer Chemours has matched that by making an incredible $100,000 donation to help.

If you’d like to donate to flood victims, Loretta Lynn’s granddaughter Tayla Lynn has set up a GoFundMe called “Heal Humphrey’s County.”