Arizona Woman Pulls Two Rattlesnakes Out Of Cactus At One Time 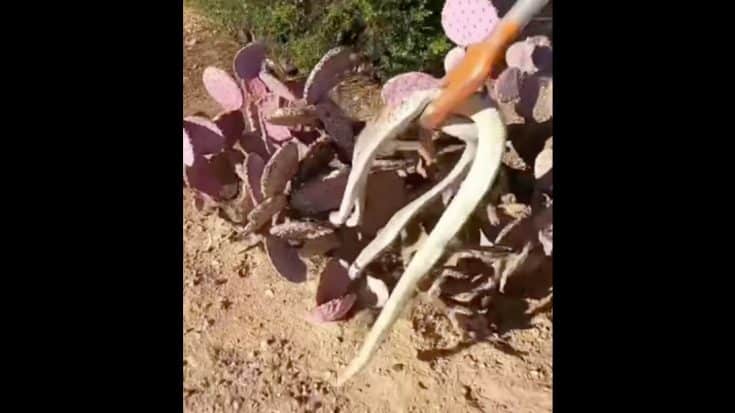 Rattlesnake season is in full swing in the southwest as temperatures increase, bringing the poisonous serpents out of hibernation. It also means that snake catchers are busy capturing and relocating the snakes.

Marissa Maki, a rattlesnake catcher with Rattlesnake Solutions in Arizona, recently shared a video of an unlikely catch. The clip shows Maki reaching into a cactus with a pair of tongs. Maki expected to pull out one western diamondback, but was surprised to see that she had captured two in one shot. Both snakes measured approximately 3 feet long.

Venomous snakes had been seen in an Arizona family’s yard, and video shows Maki found them in a most unexpected way.

She stuck a pair of tongs deep into a pink cactus and pulled the tool out seconds later with two very excited snakes writhing from the grip.

“I thought I had just one and then I somehow got both the snakes. It was pretty awesome,” Maki told McClatchy News. “I’ve never done that before and I was excited. I wish I could say I planned that, but it was pure accident.”

The now-viral catch took place on March 23 southeast of Phoenix. The homeowners called Rattlesnake Solutions after seeing rattlesnakes in their front yard and fearing that they might harm the family’s new puppy. Maki easily captured two of the snakes tangled up at the base of a pink cactus and placed them in a large bucket. The snakes were relocated “to a large pack rat nest in the desert,” a solution considered standard procedure for the company who relocated 1500 snakes last year alone.

Western diamondback rattlesnakes can live 15 to 20 years in captivity and have an average size of 3 to 5 feet, although they have been known to reach 7 feet long.

Watch Marissa Maki’s once-in-a-lifetime rattlesnake catch in the video below.