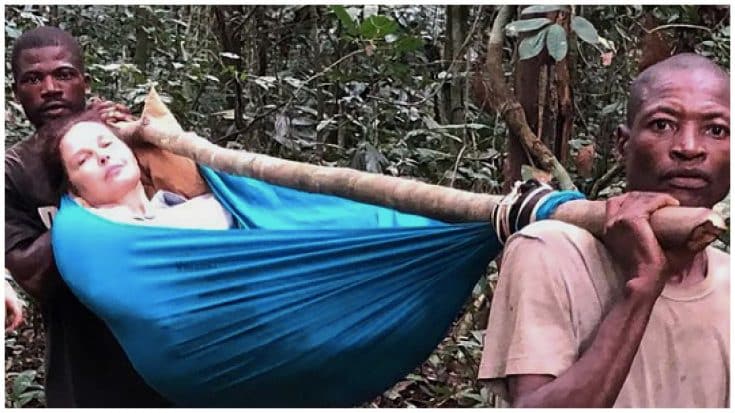 Ashley Judd is sharing more details of the harrowing events that took place following a fall in the rainforest of Congo that left her leg shattered in four places.

The actress and activist was in Congo researching bonobos, an endangered ape species, when the she “struck something in the dark” and fell. It took Judd 55 hours to reach a hospital in South Africa where her leg could be repaired. In a recent social media post, the 52-year-old shared photos of the “grueling” trip out of the rainforest and shared her gratitude to each of the individuals who helped her along the way.

According to Judd, a man named Dieumerci stayed with her while they awaited help. “Dieumerci stretched out his leg and put it under my grossly misshapen left leg to try to keep it still. Dieumerci remained seated, without fidgeting or flinching for 5 hours on the rain forest floor.”

Another man named Papa Jean eventually arrived and worked to set Judd’s leg so that she could be transported. “He told me what to do. I bit a stick…Papa Jean with certainty began to manipulate and adjust my broken bones back into something like a position I could be transported in, while I screamed and writhed,” Judd wrote. “He saved me & had to do this twice.”

Another six men carefully transferred Ashley to a hammock and helped carry her out over rough terrain, a walk that took 3 hours. From there, two men named Didier and Maradona traveled with her via motorbike for 6 hours.

“I sat facing backwards, his [Didier] back my backrest. When I would begin to slump, to pass out, he would call to me to re-set my position to lean on him. Maradona rode on the very back of the motorbike, I faced him. He held my broken leg under the heel and I held the shattered top part together with my two hands,” Judd recalled.

Ashley Judd first shared details of her accident in an Instagram Live with The New York Times writer Nicholas Kristof where she spoke from her hospital bed in a trauma ICU unit in South Africa. Watch Judd’s two-part interview and hear more about her horrifying accident in the videos below.