By Manly Bryant on June 8, 2020
Advertisement 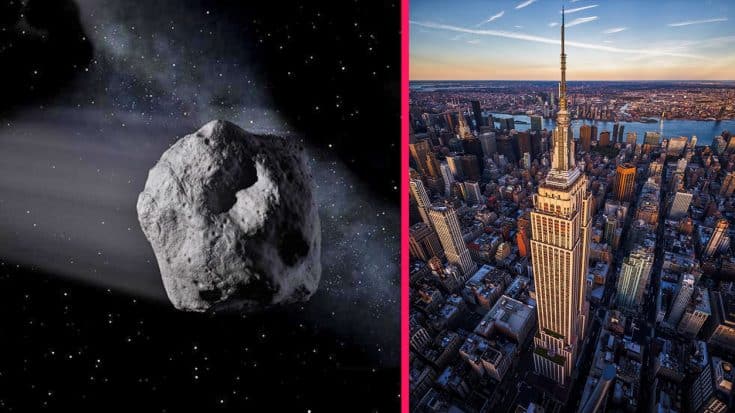 According to NASA, they had been monitoring a giant asteroid heading towards the Earth at a speed of about 11,200 miles per hour. Just as scientists predicted, it missed the planet by over 3 million miles. Even though that seems like a lot, in terms of space it’s considered very close, and scientists at NASA had good reason to keep their eye on it.

The asteroid was an Aten asteroid, which is a space rock following a very wide orbit around the Sun. NASA tracks nearly 2,000 asteroids, comets and other objects in space as they circle the sun with us, although this particular one is a new asteroid.

NASA considered the asteroid to be a “Near Earth Object” or NEO — a term used to describe comets and asteroids that have been nudged by the gravitational attraction of nearby planets into orbits that allow them to enter the Earth’s neighborhood.

The asteroid was estimated to be between 830 and 1,870 feet in length, which put it taller than the Empire State Building.

Tomorrow an asteroid the size of the Empire State Building will zoom by Earth SAFELY at about 3.2 million miles (5.1 million km). #space pic.twitter.com/J8IB2M25HN

The asteroid is expected to pass by Earth again in 2024.

Scientists have long tracked objects to see if they could threaten Earth, knowing that the impact of a certain size would be an apocalyptic event for the planet. This has led to them looking in to different ways of either knocking an asteroid off its course, or blowing it up in space.

Watch the video below to see how close the asteroid came to earth.