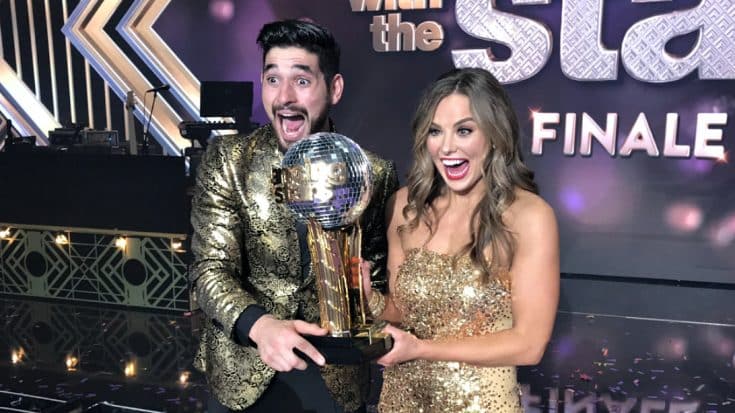 Season 28 of Dancing With the Stars is officially over and a new winner has been crowned! Bachelorette star Hannah Brown and her pro partner Alan Bersten were awarded the coveted mirrorball trophy Monday night (November 25), beating out fellow finalists country singer Lauren Alaina and Gleb Savchenko, Ally Brooke and Sasha Farber, and Kel Mitchell and Witney Carson.

Prior to the crowning of the winner, each couple had to perform two dances of their choice. For the first round, Brown and Bersten danced the Viennese waltz to Taylor Swift’s “Lover.” Alaina and Gleb danced the foxtrot to “Jolene” by Dolly Parton. Brooke and Sasha Farber danced the jive to Tina Turner’s “Proud Mary.” And Mitchell and Carson performed a jazz dance to “We’re All in This Together” by the High School Musical cast.

In the second round, the couples performed freestyles to the following tunes: Brown and Bersten to “Girl on Fire” by Alicia Keys and “Hollaback Girl” by Gwen Stefani, Lauren and Gleb to Luke Bryan’s “Country Girl,” Brooke and Farber to “Conga” by Gloria Estefan & Miami Sound Machine, and Mitchell and Carson to “Jump” by Kris Kross.

In an interesting twist, every couple scored at least one perfect score, making it an incredibly tight race at the finish line. But, Hannah Brown earned the DWTS title, making her the first Bachelor franchise alum to win the trophy.

VICTORY! Hannah continues to be a badass at everything she does #DWTS Congrats @hannahbrown!pic.twitter.com/2n5excetbu

During the finale it was also announced that all four finalists, along with former Season 28 competitors Kate Flannery and Sailor Brinkley-Cook, will join the upcoming Dancing with the Stars – Live Tour 2020. Tickets can be purchased here.

Join us in congratulating Hannah Brown on her win!