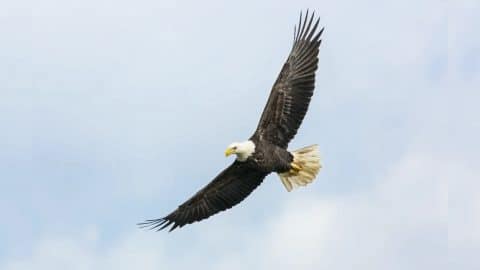 Rocky Matthews, a farmer living in Murtaugh, Idaho said a bald eagle has killed 54 of his sheep and there’s not much he can do about it for the next 30 to 60 days.

“A large eagle nest has existed on his property for more than 20 years, but the birds have never affected his farming operations. Currently, the nest is home to two adults and at least two babies,” Magic Valley reported.

According to the Bald and Golden Eagle Protection Act and the Migratory Bird Treaty Act, the bald eagle is protected. The penalties for killing a bald eagle can be up to $100,000 in fines and up to one year in prison for the first offense.

Matthews contacted the Idaho Wildlife Services who directed him to the U.S. Department of Agriculture’s Animal and Plant Health Inspection Service. A program that works to resolve conflicts between people and wildlife.

He’s filled out a permit paper with the program to get some assistance but it can take 30-60 days to process, however, it can be expedited in emergency situations. In the meantime, while he’s waiting, he’s moved his sheep closer to his barn.

“In 45 days, I’ll be out of sheep,” Matthews said, according to Magic Valley.

Moving them worked for a few days, however, then the eagles started killing them again. Matthews then moved the younger sheep to a different pasture but he said the eagles just started targeting the older sheep. The dead sheep range from 12 to 80 pounds.

“The damage under the hide is a hundredfold from what you see on the exterior,” Matthews said.

“The animals all had puncture wounds the circumference of a No. 2 pencil,” Magic Valley reported. “It wasn’t until he saw an eagle attack his flock that he realized the true culprit.”

There’s not much they can do about it until the authorities step in and take care of it. However, Matthews and his wife, Becca, filled out paperwork with a program that will reimburse them a portion of their loss.

The program is called the USDA Farm Service Agency Livestock Indemnity Program and if they get approved, they will get paid 75% of the market value of the livestock.

Video Report On The Eagles & Sheep Below