Bald Eagle Snatches Man’s Fish As He Reels It In

By Manly Bryant on September 22, 2022
Advertisement 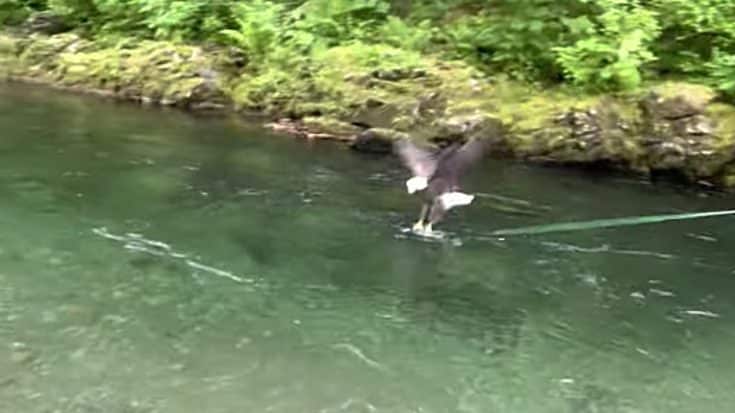 A video shared on YouTube by ViralHog back in July of 2021 shows the incredible moment a fisherman was flyfishing in Sitka, Alaska and an eagle swooped down and stole his fish.

“Was out fishing for dolly varden one afternoon and had this happen while playing a nice char on film! Luckily I got my fly back!”

The video showed the man had just caught a fish and was cautiously reeling it in while complaining that an eagle in the trees was trying to steal his fish.

As the man reels the fish in towards the shore, you can see the eagle perched up on a branch about 20 feet high just watching the fisherman make the catch.

The moment the fish showed its shiny belly on the surface of the water, the eagle jumped off the branch and went into full-throttle hunter mode. The eagle quickly swooped down and grabbed the fish in its talons.

The man screamed, “Come on now! Come on!” as the eagle few off with the fish and the line still attached.

You can see the fisherman’s reel spinning out of control until the line eventually snapped off the fish. The man said he ended up getting his fly back to continue fishing, but that was one wild experience that he captured on video.