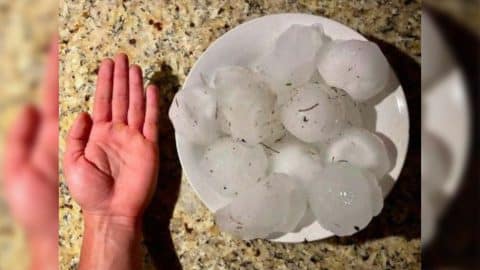 Residents of Texas experienced one of the worst hail storms in history on Wednesday night leaving many properties damaged beyond repair. According to officials, some of the hailstones got up to three inches in diameter, which is bigger than a baseball.

“The hail damage yesterday could become yet another billion-dollar weather disaster for the US,” CNN’s senior meteorologist Dave Hennen said.

Very large hail 2 miles NE of D’Hanis, Texas around 7:30pm. Getting reports of some wind-driven hail damage in that area from my parents. @NWSSanAntonio #ewxspotter #txwx pic.twitter.com/ZBelhjaPnp

This may actually be the second billion-dollar disaster this year in Texas after the extreme Arctic outbreak back in February. Officials said there were at least 38 reports about the hail near San Antonio, Fort Worth, and Oklahoma City.

“Many times, the storms impact more rural areas in this part of the country, but in this case, the largest hail targeted large populated areas like San Antonio, Forth Worth, and Oklahoma City, so more property was damaged,” Hennen explained.

Residents shared photos and videos of the hail storm and of the aftermath and some people obviously got it worse than others. One photos shared on Twitter showed windows smashed out of a car with a caption that read:

Car damage from the hail storm sent to me by one of my coworkers at Pub W in Norman. Most of the cars in the parking lot have similar damage @themahler @weatherchannel @StormHour @NWSNorman #okwx pic.twitter.com/RqwZHg7jKX

Others shared photos showing just how big the hailstones were and it looked like a very dangerous situation to be in.

Probably one of the craziest videos shared on social media was of the giant hailstones hammering down at a resident’s backyard pool area. The guy appeared to have stepped outside his backdoor to film the video and it almost looks like he’s inside a baseball batting cage. Check the footage out below.