Bear Accepts Orphaned Cub Into Den After Its Mother Dies

By Manly Bryant on March 14, 2022
Advertisement 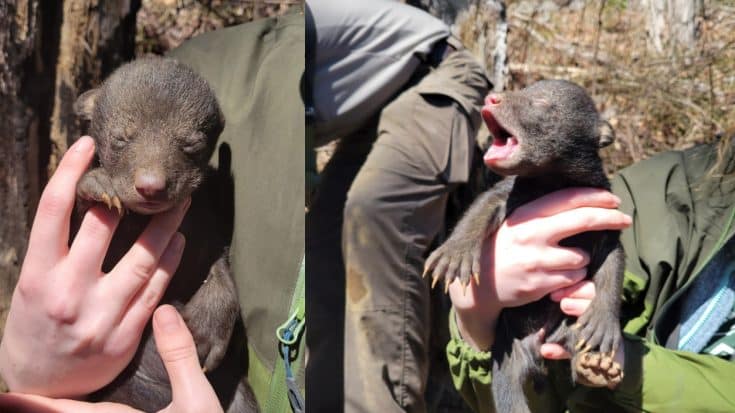 The Tennessee Wildlife Resources Agency released a public statement on what happened to a bear cub that was found on the side of the road after its mother was hit and killed by an oncoming car.

Police said that they got a call from someone who was driving down a Cherokee National Forest road in Cocke County and noticed the orphaned bear cub.

It was only seven weeks old and still in need of a mother, so wildlife officials got to work on a solution.

Appalachian Bear Rescue came and picked the bear up and nursed it while they spoke with wildlife officers who said they had come across another mother bear’s den who had just recently given birth to two healthy cubs of her own.

Wildlife officers suggested the rescue team attempt to reintroduce the bear cubs to the mother, adding that said this particular female has been known to adopt orphaned bear cubs in the past, so there was a chance it would be a success.

In order to survive, bear cubs depend on their mothers one-hundred percent of the time until they are around five months old and mother bears are extremely protective when it comes to their young.

Wildlife officers said while female bears have adopted orphaned cubs before, however, it’s not that common.

Authorities took the cub by backpack to the mother bear’s den, nursing it along the way and then placing it at the entrance to the den.

Wildlife officials said they could hear the other two bear cubs down in the den nursing with the mother and watched her reach out with a paw and pull the orphaned cub close to her.

“Peace Bear scampered into the den very quickly. We caught one final glimpse of his little feet as he disappeared from sight and joined his new bear family,” Appalachian Bear Rescue said on Facebook.“You want to do things just right…the fostered cub needs to be full enough not to make too many loud noises as you approach the den site and hungry enough to nurse from his new Mom as soon as he enters the new den. It’s a delicate balance.”

See The Offical Public Statement Below On The Bear Cub