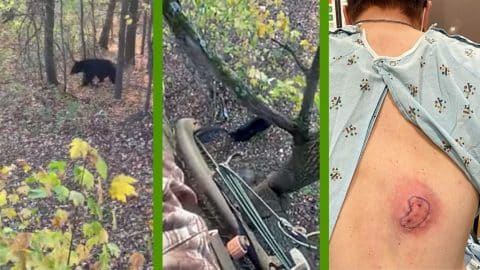 25-year-old pitcher for the Springfield Cardinals, Dalton Roach told the Eau Claire Leader-Telegram that he was bitten by a black bear while hunting on his family’s property.

The property is located in Trempealeau Country, Wisconsin when he first spotted the bear. Dalton said he was sitting in a tree stand with his bow in his hand about 20 feet off the ground

It was the first time he had ever seen a bear on his family’s property in all the years he’s been hunting there.

In awe of the wild bear, Dalton pulled out his phone to record it as it moseyed around the forest floor. The video showed the bear walking around until it stop right under the tree Dalton was sitting in.

“I thought, ‘OK, it’s time to put the phone away. I want to be hands-free now,’” Dalton told the telegram.

All of a sudden, Dalton said he heard clawing and scratching coming up the tree and before he knew it, the bear was right behind him breathing down his neck.

“Then I feel a paw on my lap. He just kind of left the paw sitting there, so it’s not like I wanted to make a big move and make him squeeze,” he told the paper.

Dalton said he remembers his gear on his back tightening up and he turned back to see the bear was biting him on the back. Fight, not flight kicked in for the young baseball player and he said he made himself look as big as he could and began yelling at the bear.

Fortunately, that worked. The bear stopped biting him and began climbing back down the tree. Dalton continued to yell at it as it ran off out of sight. Once the animal was gone, he climbed down from the stand and walked back to his truck as quickly as possible.

“I think I still had so much adrenaline pumping that there wasn’t tons of pain going on and I could tell there wasn’t a lot of blood dripping,” Dalton told the Telegram-Leader.

He drove himself to the hospital where they cleaned a bite mark on his back and then treated him with antibiotics and a tetanus shot. He was also given a shot for rabies for precaution and is expected to make a full recovery.

Dalton says that all he can remember during the moment was getting himself free from the bear. Looking back on it now, he realized that it could have gone wrong and he might have not been looking at a promising career in the Major Leagues or living out a wonderful life with his family. More on the story in the video below.