Bear Found Stuck At The Top Of Utility Pole 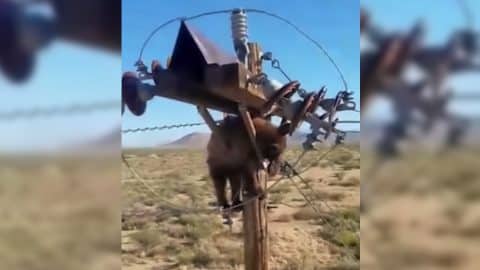 Sulphur Springs Valley Electric Cooperative in Willcox, Arizona got a call about a bear after it was found at the top of an electrical pole.

Werner Neubauer, a lineman for the company was called out to the scene to take a look at the situation. In the meantime, Valley Electric turned off the power so the bear wouldn’t get electrocuted.

When he got there he powered up his truck’s bucket lift and proceeded to ascend to the bear that was perched more than 30 feet in the air. With an 8-foot fiberglass stick, he nudged the bear to go down and started talking to it.

“I think I told him I was gonna help him get down the pole,” Werner said, according to ABC. “I know he couldn’t understand me. But it did get his attention.”

He said the bear grabbed and bit the stick a few times before eventually wiggling out of its predicament and climbed down from the pole. It then ran off into the desert.

Werner said he nor the bear was injured during the incident and the power outage only lasted about 15 minutes.

According to officials, the residents were informed why their power was turned off and everyone was understanding. They say that this is the second time in the past 30 days where a bear has been seen in a southern Arizona city.

Footage Of The Bear On The Pole Below