By Manly Bryant on May 1, 2019
Advertisement 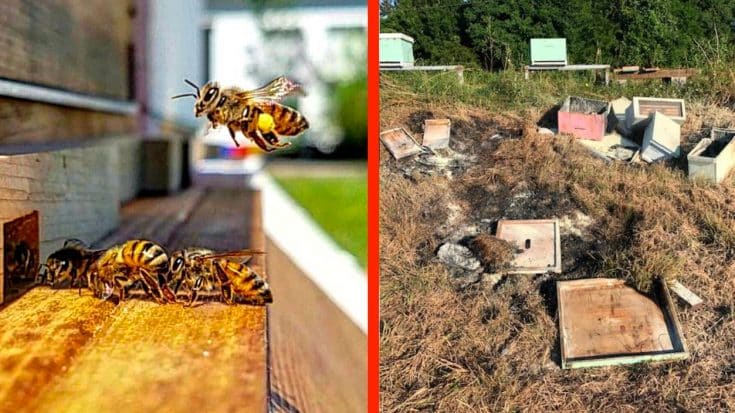 It’s shocking that we’re reporting on this because it’s hard to believe someone would burn multiple beekeepers nest of bees but here we are and this is the story.

Apparently, someone snuck onto a beekeeper’s land and set fire to a nest of bees killing over a half a million bees. The incident was reported early Saturday morning by a Brazoria Country Sheriff’s deputy when he witnessed a few of the bee boxes on fire.

According to the Brazoria County Beekeepers Association, there were 24 colonies of bees in this specific location. The association took to Facebook saying:

“Last night someone did major damage to a BCBA Bee Yard in Alvin last night. Its [sic] bad enough to think in todays [sic] world this would happen but dumping them over and then setting fire to them is beyond comprehension.”

The Situation Gets Worse

This happened in Alvin, Texas and not only did the deputy find the beehives on fire but he also found a few of the bee boxes thrown into a pond near the site. The BCBA was in total shock and the administrator of their Facebook page emotionally expressed how she felt:

“I broke down in tears when I saw a floating brood frame in the water with bees still caring for the brood.”

Like a battle scene from a movie, many of the bees were dead on site while the remaining survivors were trying to save the nest and their other bee companions. The loss of these bees will no doubt have a major effect on the surrounding crops this season for they depended on the bees to pollinate them.

The Beekeepers Association went on to offer a $1000 reward to anyone who had information or could lead them to the criminal who did this. In addition, the Brazoria Country Crime Stoppers offered a heavier reward of $5000 for the same information. So if you live in the area or have any ideas please contact the BCBA here so we can get this criminal caught.