By Manly Bryant on December 2, 2022
Advertisement 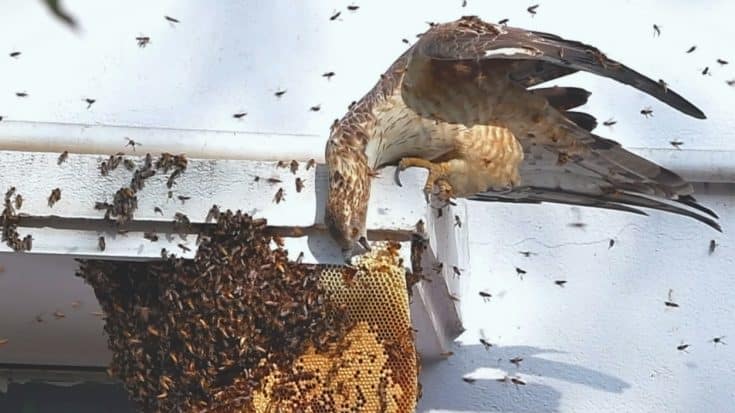 Hundreds of bees buzz in panic and go into a frenzy as they helplessly try to defend their hive from a massive aerial intruder perfectly designed to be the bee’s worst enemy – the honey buzzard.

Equipped with a chemical deterrent in its feathers that protects them from wasp and bee attacks, the honey buzzard can confidently walk right up on a wasp nest or bee hive and feast on the hive’s larvae and honey as if it was an open buffet.

Also equipped with scale-like feathers around their eyes and forehead that provide armor against the stings of their prey, the honey buzzards are truly built to go after this species of insects with the ultimate defense systems.

Honey buzzards are specialist hunters who feed mainly on the larvae in the nests of wasps and hornets. They spend large amounts of time on the forest floor excavating wasp nests with their long toes and claws that are made to rake and dig for the bugs.

When they are having a hard time finding a wasp or hornet nest, however, they are also known to invade a bee hive to eat their precious larvae just like you’re about to see in this incredibly cool video.

Filmed by Rahul Chakraborty in Bishnupur, Bankura, West Bengal, India, the video was captured and uploaded to Rahul’s YouTube channel where he described interesting facts about the bird.

“The crested honey buzzard is a bird of prey in the family Accipitridae, which also includes many other diurnal raptors such as kites, eagles, and harriers. This species is also known as the Oriental honey buzzard. It feeds on grubs and honey from bees’ nests,” Rahul wrote on YouTube. “True to its name, this species is a raider of wasp and bee nests, although it prefers bee and wasp larvae over their honey.”

Footage Of The Honey Buzzard Vs Bee Hive Below