Before ‘Idol,’ Kelly Clarkson Admits She Never Wanted To Be Famous 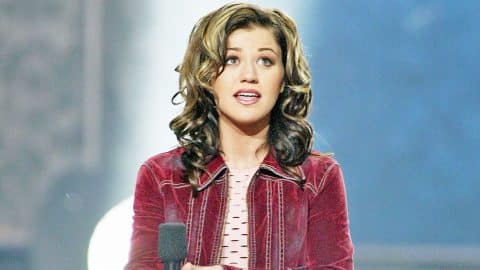 Before she was American Idol‘s beloved first winner, she was just a small town girl from Texas. Her story tells of a journey that involved multiple jobs, several rejections, and one life-changing audition.

Kelly Clarkson‘s unique upbringing played a large responsibility in the person she is today that many people don’t realize. Beyond the bright lights and flashy outfits, is one of America’s most talented stars.

In 2000, Clarkson graduated, packed her bags, and made the big move to Los Angeles. With just a demo and her dreams, she was determined to find her place in the hustle and bustle of Hollywood. Talking with Guy Raz on his podcast, The Rewind, Clarkson admitted that her plan was never to become a big star, as she “didn’t want to be in the public eye.” Originally, the 18-year-old had hopes of being a backup singer.

“I don’t know, I was very low key about it. My goal wasn’t to move to LA and become like a famous singer.”

That was just the beginning.

1982, Born on this day, Kelly Clarkson. The singing sensation was the winner of the first season of American Idol in 2002. http://youtu.be/YpMaKqm12hw?t=1m25s

While trying to make a name for herself, Clarkson admitted the struggle of making ends meet on top of bills and living expenses. The singer told Guy Raz that she maintained several different jobs in order to keep head above water.

Then, the unexpected happened. While out to lunch with her roommate, Clarkson’s apartment caught on fire. Forced to move back to her hometown, she accepted it for what it was.

Not long after returning home, she heard about American Idol‘s audition in Houston. Walking into her audition with a top made from an old pair of her jeans, she let her confidence take over.

“Well, I had nothing to my name. Like literally, I had to make that top to go to this audition. I had like no clothes, no nothing. I think when you have nothing, you have nothing to lose.” Clarkson giggles, “So you walk in and you’re like ‘what do I have to do to get this job?'”

After wowing the judges, Clarkson earned her “golden ticket” back to Hollywood.

The rest was history for Kelly Clarkson. She went on to win the hit series with her debut single, “A Moment Like This” becoming one of the best-selling singles of that year. Now, the 3-time winning Grammy artist has made an incredible impact on the music industry that she never could’ve dreamed of.

It’s amazing to see how far some of the most influential artists have come. It’s fair to say Kelly Clarkson has earned her success in the most genuine way possible.