By Manly Bryant on August 6, 2020
Advertisement 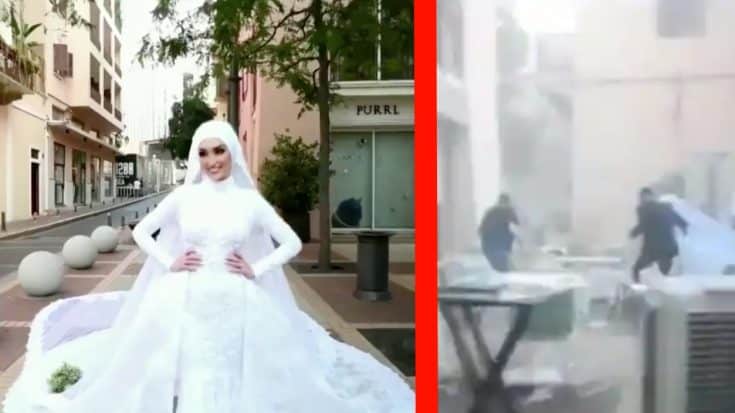 On August 4th, 2020, a bride happened to be caught in the massive explosion that shook the Lebanese capital, Beirut.

The 29-year-old bride was posing with a beautiful smile in her radiant long white gown and veil when the blast cut her wedding video short. The massive explosion was so strong that the powerful shockwave almost knocked her down on the ground.

The video of the explosion went viral on social media, showing the smoke billowing from fire and a dome-shaped cloud following the blast at the city’s port.

The large blast happened in a warehouse at about 6pm local time. It killed 135 people, injured 5000 people, and with hundreds of people reported missing as shared by CNN. According to the local authorities, the explosion is linked to 2,750 metric tons of explosive ammonium nitrate stored unsafely at a warehouse.

Beirut explosion generated seismic waves equivalent to the magnitude of a 3.3 earthquake. Glass blasted from windows everywhere from up to 15 miles away. Debris covering the city shows just how strong and destructive it was. The blast was said to be heard from 150 miles away on Cyrus Island on the eastern Mediterranean coast.

After the blast, the bride Israa Seblani and her husband Ahmad Subeih carried on with their celebration.

“My husband told me to continue, we can’t stop. I was like okay, why not, we continue. I was not living the moment actually, I was like walking, my face was smiling, my lips were smiling, that’s it, not more. Then we went to have a dinner,” she told Reuters.

Israa Seblani also said she is grateful that she and her husband survived the massive explosion and that she is thanking “God for protecting [them]”. They said they will try to live happily ever after, even though they are still shocked by the current events in Beirut.