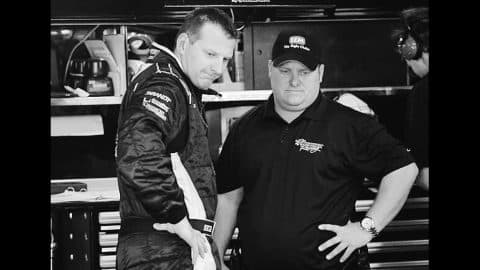 The shocking death of such a young and truly-loved part of the NASCAR family has left a majority of folks devastated after just seeing him at the track this last Saturday for the Xfinity Series race in Loudon, New Hampshire.

The flags are flying at half-staff @KauligRacing today in honor of Nick Harrison. pic.twitter.com/EM2mo3BSNO

37-year-old Nick Harrison tragically passed away on the evening of July 20th and the details surrounding his passing and cause of death have been kept under wraps.

Harrison who currently was working with Kaulig Racing  but had previously worked with some of the top drivers in the sport and has been a staple in the NASCAR garage for more than a decade. His time working in the Xfinity Series is dotted with periods of work with Richard Childress Racing, Austin Dillon, Paul Mernard, Kurt Busch, and from all of that – five career victories.

We all lost a friend last night. We love you Nick Harrison. You were a leader, and a great friend to all.

Nick really helped me rebuild my career when I was at a low point. RIP pic.twitter.com/8t3TRVHuco

…….We will never understand why we are called home at the exact time that we are, but our good buddy Nick Harrison got that call last night. He never met a stranger, and would bring a smile to everyone’s face he was around. We love you man & you will be greatly missed 🙏🏼

“Words can’t describe how I feel about (Harrison),” Austin Dillon said in a tweet mourning the passing of his close friend and former crew chief. “The man was one of the first people to believe in me in the Cup Series. He gave me an opportunity to drive for James Finch, which gave me confidence to believe in myself at the top level.”

Our thoughts and prayers are with all of those who knew and loved Harrison. 37 is such a young age to go, and he will be truly missed by all.

Read some of the heartfelt words from folks in NASCAR below.

Words can’t describe how I feel about @NickHarrison111. The man was one of the first people to believe in me in the Cup series. He gave me an opportunity to drive for James Finch which gave me confidence to believe in myself at the top level. We were able to win the together…

multiple times in @XfinityRacing and a win in @NASCAR_Trucks. My favorite thing to this day to hear over the radio was his voice saying Hauling Balls. I hope today I hear it on the radio as we give it all we got on the track today for Nick. 🙏🏻

I'm so sad to see this. I was fortunate to work with Nick driving for James Finch. Nick was one of the most fun people I was ever around at the racetrack. Prayers with the team and the Harrison family. Very sad……. https://t.co/QhIUf7JZBN

Not just a crew chief, but a friend to everyone who knew him. I, and everyone at Kaulig Racing are devastated. He will be greatly missed. pic.twitter.com/bXvQF973DG

So sad to hear about Nick Harrison. You will be missed. Last words from him to me yesterday were “it’s a new day, good luck, have fun bud!” Never was a dull moment around Nick, he always brought a smile to everyone’s face. Prayers out to his family

Only worked with Nick Harrison a few times but we instantly became friends. He was genuine, hilarious and a true racer. Very sad to hear of his passing. Only thing I can say is This is not our home. Praying for his friends and family. pic.twitter.com/Ia90TjzlZt

So sad to hear the passing of Nick Harrison, thoughts and prayers go out to his friends and family. The NASCAR community is a tight family and there are many heavy hearts https://t.co/qxi4yaAqgd