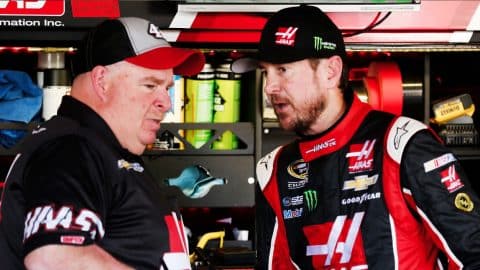 For more than a month, he kept this secret health battle from nearly everyone in NASCAR…but now he’s opening up about his recovery to the public.

Tony Gibson has been a staple at NASCAR tracks for decades. He’s served as crew chief to some of the biggest names out there and has made a great career for himself working with Stewart-Haas Racing since 2009.

After 30 years of traveling the #NASCAR circuit, No. 41 crew chief Tony Gibson is coming off the road in 2018. Thank you for the good times, the fast laps, the poles, the victories, the hard work, the dedication and the memories, @TonyOldMan41! #2017FinalLaps pic.twitter.com/c2Ypb8LOvK

In December of last year, Gibson announced that he was transitioning into a very different role at SHR – one that would allow him to come off the road, but still remain hands-on with the teams.

“I love being hands-on, which I’ve always been,” Gibson told NASCAR. “So this will allow me to spend more time bringing everyone together as a group, getting to work with some guys in the chassis shop, fab shop, and body shop — all the guys down on the floor, the grunts — everybody that’s really making this thing happen. Just being involved with them and making better parts and better pieces.”

After working in his new role for slightly more than half of a year, Gibson suffered a stroke – which he is now recovering from, and has been, for the last six weeks.

Back in February 2017, Gibson underwent surgery to have his gallbladder removed and has always been in touch with friends, colleagues, and fans on social media. Just two days before his stroke, Gibson was posting photos of a giant fish he’d caught while out on the lake. That was the last thing he said for nearly two months…

Now, in the most-recent tweet from Gibson, he shares his story of his stroke and expresses his gratitude for those who were there for him in his time of need.

“Happy to finally be back at work after suffering a blood clot in my brain on July 6,” he wrote. “The blood clot caused a stroke in my vestibular system which affects the eyes and ears. I want to thank everyone who called, texted, sent well wishes and especially those who prayed for my recovery…”

His secret health battle with a blood clot and stroke could have turned out much worse and we are so happy to see him back at work, doing what he loves after experiencing something like this.

What a blessing to have such a supportive circle of friends, family, and fans!

Watch this moving video of Gibson and Kurt Busch reliving emotions after their remarkable Daytona 500 win!