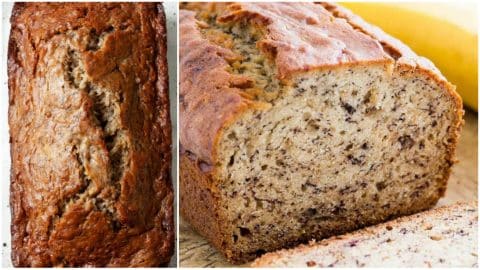 It will come as no surprise that Banana Bread has been the most searched for recipe on the internet this year. In the midst of the pandemic, novice and experienced home bakers were craving comforting, easy foods that required few ingredients, and banana bread fit the bill.

We’re a curious bunch in the Country Rebel Kitchen. This writer often sits and researches history of recipes in the midst of creating my own or tweaking my favorites. The history of banana bread was especially intriguing. After all, who had the bright idea decades ago to mash up bananas and stir them into a yeast-less bread? Whoever it was likely changed the course of home baking forever as we can’t even imagine a life without banana bread.

The King Arthur Baking Company credits the Great Depression era with the creation of the first loaves of banana bread. And it makes perfect sense that during a time when food was sparse and folks were deliberately avoiding waste as much as possible that foods such as an overripe banana would suddenly become a valuable delicacy. It was also during that time that baking powder and baking soda manufacturers began to make their product available to consumers nationwide, making it possible to make bread without yeast.

Thus, quick banana bread was born. Recipes for the sweet treat can be found in cookbooks dating back to the 1930s, and many of those recipes were similar. But, with the birth of the blogging age, banana bread took on a whole new life with additions such as chocolate chips, crumb and streusel toppings, peanut butter, cheesecake, salted caramel and even strawberries.

While banana bread has been a popular bake for nearly a century, it’s popularity skyrocketed this year as we once again found ourself in a time where yeast was sparse, folks found themselves in the kitchen baking during quarantine, and folks were craving the comfort of warm, fresh home baked goodies. Everybody has their preference when it comes to banana bread (it’s versatility is one of the things we love about it most!), but we tend to gravitate toward the old-fashioned, no fancy frills or add-ins, recipe that our grandma’s used to make.

We’re sharing our favorite banana bread recipe below and hope that you get as much joy out of it as we have. (If you prefer a jazzier banana bread, check out Paula Deen’s Loaded Banana Bread in the video below.)

Preheat the oven to 350 degrees F. Grease two loaf pans and set aside.

In a small bowl, mash bananas. In a large bowl, use a hand mixer to cream together butter, granulated sugar, brown sugar, sour cream, vanilla and cinnamon until light and fluffy. Add in eggs and beat well. Stir in flour, baking soda, and salt. Fold in mashed bananas until well combined. Divide batter up between prepared loaf pans.

Bake for 40-45 minutes or until toothpick inserted in center of loaves comes out clean. Allow to cool for 10 minutes in the pan then transfer to a cooling rack.