Bicyclist Falls Off Bridge In Florida & Get’s Bitten By Alligator 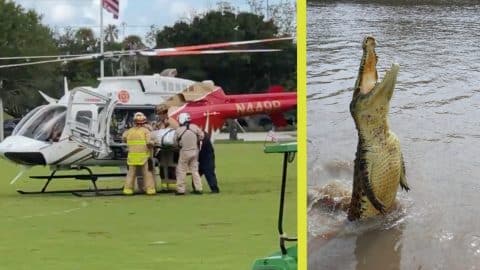 The Martin Country Sheriff’s Office in Florida shared a post on Facebook saying that a man riding his bicycle was bitten by an alligator and had to be airlifted to the hospital with “traumatic” injuries.

Man seriously injured after being bit by an alligator at Halpatiokee Park in Stuart. Victim fell off of his bike and said he was attacked. First responders on are the scene now. pic.twitter.com/41d07hpZIT

Officials did not say exactly where the man was bitten but they did say around 11am he was riding over a wooden bridge when he lost control and fell into a small body of water.

That’s when the man was bitten by an eight-foot female alligator. He was then able to somehow get away from it by climbing up a six-foot embankment where another bystander helped rescue him.

According to Fire Rescue official Shawn Lisowy, he was about a mile down the bike trail in Halpatiokee Park but was able to get out of there and was airlifted to Lawnwood Reginal Medical Center & Heart Institute in Fort Pierce,

“You got to be careful when you’re around the water, especially this time of year,” John Davidson, a retired firemen who has been a trapper for about 10 years told TC Palm. “The females are sitting on nests and are particularly aggressive.”

John was able to capture the eight-foot, 170-pound alligator and relocated it to a farm near Fort Drum. He said that alligator attacks in the area are very rare but there are normally about two to three attacks a year statewide.