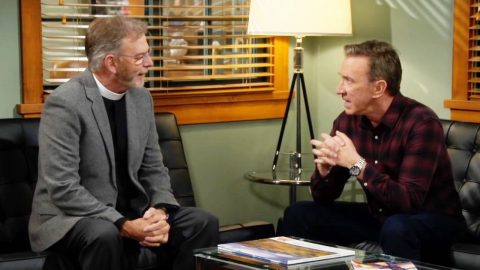 This Spring, a fan-favorite sitcom came to an end after a historic nine years. The Tim Allen-led comedy Last Man Standing survived a cancellation at ABC after season six, was picked up by Fox and lasted three more seasons.

It’s clear the main cast had so much love for the show, but so did its guest stars! One recurring guest star just shared a photo that proved this to be true!

He appeared in eight more episodes throughout the show’s run, with the latest being in the final season.

He shared a photo of the two the first time he guest starred.

On Thursday (June 10), Engvall took to Facebook to share a “Throwback Thursday” from the Last Man Standing set. Not only was Tim Allen in the photo, so was country legend Reba McEntire! If you have never seen the show, this photo might be extremely random, but McEntire actually guest starred in a 2016 episode!

The comedian’s guest star role shouldn’t come as a surprise to fans, seeing as he and Allen have been friends for decades! That’s Bill on the far left and Tim right next to him in the photo below.