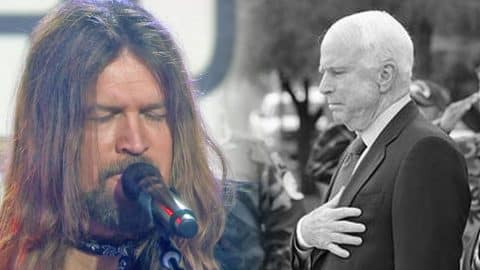 As a man of the military, the late John McCain knew the phrase “All gave some, and some gave all,” very well.

After graduating from the United States Naval Academy in 1958, McCain was commissioned into the United States Navy, where he became a naval aviator. During a mission in 1967, he was shot down, injured, and captured by the North Vietnamese and was a prisoner of war until 1973.

He was tortured several times a week during that five-year period, but never gave up any information, and even helped free many other prisoners of war. Some of the injuries he suffered left him with lifelong physical disabilities.

McCain is widely considered a true American hero for his bravery and sacrifice during those years. After retiring from the Navy as captain in 1981, he moved to Arizona and was elected to the US House of Representatives. He served two terms before being elected Senator of Arizona, and won reelection five times. He served his country all the way until his death on August 25, 2018.

Here are the details for John McCain's funeral: Services for the senator will be held in Phoenix, Washington and Annapolis. https://t.co/iZCoNOBxk6 pic.twitter.com/oN2di7qoV8

People from all kinds of political backgrounds have paid their tributes to McCain, and country music singers have proven to be no different. Many took to social media to express their condolences, but Brad Paisley took time out of his concert in Bristow, Virginia to dedicate his performance of “When I Get Where I’m Going” to the late Senator.

@BradPaisley such a sweet goodbye to a true American hero. Also this #ArmyMom appreciated your kindness to our troops. pic.twitter.com/XGJYDzOCG0

Another singer who wanted to pay tribute to McCain through song is Billy Ray Cyrus. He appeared on The Today Show during Kathie Lee Gifford and Hoda Kotb’s hour to perform “Some Gave All.” Cyrus re-recorded his 1992 song for the upcoming movie God Bless The Broken Road, which tells the story of a young soldier who was killed in Afghanistan and the people who he left behind.

“Service, sacrifice, a young widow that’s lost her husband. As you know, military, the whole family makes that sacrifice,” he explained. “[The movie is] kind of the very definition of ‘Some Gave All,’ a song I wrote back in 1989 about a Vietnam veteran I met up in West Virginia. When I saw the film, and they asked if they could use ‘Some Gave All,’ I said, ‘It’d be an honor’.”

Speaking about why he chose to re-record the song, instead of just use the 1992 original, Cyrus said that it’s so much more special and meaningful to have his songwriting partner, Don Von Tress, a two-tour Vietnam veteran by his side after all these years help him on the track.

Before taking the stage, Cyrus said, “If I could, I’d like to dedicate this performance to John McCain and his family, he’s a true American hero.”

US Navy veteran Derek Jones helped Cyrus dive into the emotional song, playing guitar and harmonizing with the award-winning singer. Their incredible rendition of “Some Gave All” will likely give you chills, especially knowing that a veteran was playing with Cyrus, and it was dedicated to McCain.

Watch the full interview and performance in the video below.