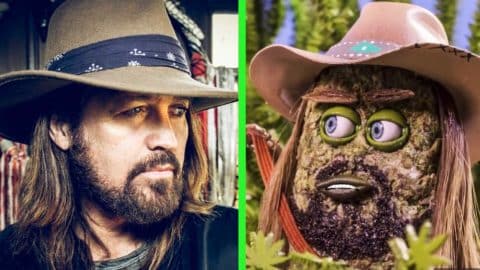 “The SnakeDoctor Circus album certainly has a lot to say and the music reflects all my influences,” Cyrus said in a press release. “My goal has always been to make music that would touch people’s lives around the world. I’m excited about getting the music to the people.”

Besides that statement, and its May 24th release date, information about the upcoming album, which is available for pre-sale here, has been scarce…until now.

At midnight on Thursday night (May 10), Cyrus dropped the first music video off the album to a song titled “Angel In My Pocket,” which, according to Cyrus’ team is about smoking a joint. For more than 40 years, Billy Ray admits that he was a closet marijuana smoker, but now he and wife Tish are very open about partaking in the recreation. In February, Cyrus posted a photo of Tish with a massive stash of weed, captioning it, “Yes! Like I said Tish Cyrus….my how the times they are a changing #CrAzYMaMa.”

He shared another photo of his wife Tish with a bouquet of weed and a caption that explained his 40-year hidden smoking habit – and how it once cost him a car.

The video begins outside a gas station/convenience store called Nug Nation with a long line at the cash register. Instead of people waiting in the line, they are all animated marijuana buds, including Cyrus, who is the cashier.

His boss wakes him up off the floor and tells him to get him to get back to work manning the cash register, mopping the floor, and taking out the trash. Once at the dumpster, he lights up a joint and the lyrics start playing.

Billy Ray asks his boss, “You ever try to eat a clock? It’s delicious…but man, it’s time consuming,” before his nug character gets fired. As the song plays, he collects his belongings and leaves, but not before trashing the place!

We then follow him on a day of marijuana-filled adventures, where he even takes part in a Hee Haw-esque skit.

“Angel in my Pocket” was co-written by Billy Ray Cyrus and Don Von Tress, who co-wrote “Achy Breaky Heart.” The video animation was co-directed by Potsy Ponciroli of Hideout Pictures and Mikey Peterson of Nug Nation, a stop motion animated series.