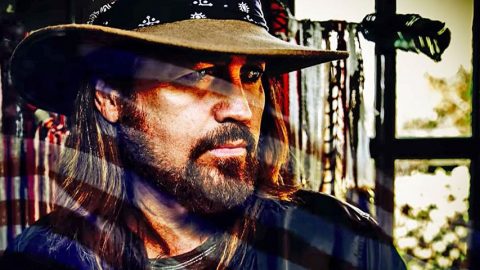 Billy Ray Cyrus has admitted to being a “real deep thinker” ever since he was a kid.

That deep thinking shines through in the country singer-songwriter and philanthropist’s latest single, “The Goddess of Democracy.” It’s no coincidence Cyrus chose to premiere this new single on the Fourth of July, the 242nd birthday of our United States.

Cyrus’s thought-provoking ballad washes fluidly over current events of the day, allowing listeners to formulate their own questions, fears, and misgivings about the state of our great nation.

Different For Every Listener

No matter your affiliation, the lyrics and interspersed allusions to religious icons are bound to bring images to mind, most likely different ones for every single person. That’s just the nature of the song.

If you’re familiar with the Tiananmen Square events of 1989, you may also recognize “The Goddess of Democracy” as the figure of a defiant woman holding high a torch. It was a rallying symbol for the flagging, divided protest movement that was demanding political rights and accountability from the party.

When soldiers seized the Square less than a week later, they toppled the statue, smashing the head of the goddess beyond recognition.

No doubt as you listen to this you’ll have a list of events of your own that come forward. That’s the power Billy Ray Cyrus unleashes.

Cyrus, whose hits include: “Some Gave All,” “Achy Breaky Heart,” “Could’ve Been Me,” and many more, continues to inspire audiences and entertain sold-out venues even after nearly three decades of performing.  Maybe it’s because the man knows how to re-invent himself. He simply never stops thinking.

Cyrus shared the timely and relevant video with an insightful comment: “On this #4thofJuly I wanted to share this thought from my new band. It’s a sneak peek only up for 24 hours. Hope this brings some perspective and stimulates patriotism and loyalty to our beloved America.”

What comes to mind when you watch this powerful new song? What feelings does it elicit?