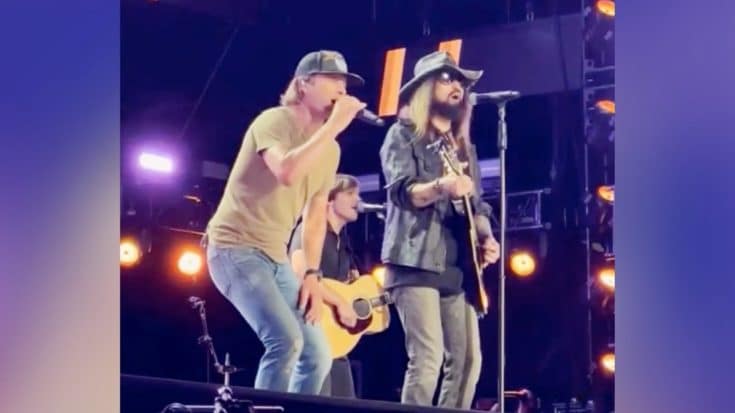 Along with Elle King, Dierks Bentley was tasked with hosting the 2022 CMA Fest for its televised special that aired on August 3 on ABC. Since he was one of the hosts, it makes sense why Bentley’s set included one of the biggest surprise collaborations of the entire festival!

Bentley was tasked with closing out the fourth and final night of the festival. He sang two songs with King, including their new duet “Worth a Shot.”

But King wasn’t the only duet partner who joined Bentley at CMA Fest. Much to everyone’s surprise, Bentley paused his set to welcome Billy Ray Cyrus to the stage!

I have been a part of 30 FanFair/ @CountryMusic Fests. None meant more to me than last night! Thanks @DierksBentley! Honored to share the stage with u. @ElleKingMusic u raise the bar & fans u are the foundation to this gift we call music. #cmafest

The duo teamed up to sing Cyrus’ iconic hit “Achy Breaky Heart.” The song was released in 1992, so it’s celebrating its 30th anniversary this year!

“Achy Breaky Heart” reached the #1 spot on the Hot Country Songs chart following its release. It also crossed over to claim the fourth spot on the all-genre Billboard Hot 100 chart.

The music video for “Achy Breaky Heart” featured a line dance, which many people still perform to this day. In fan-filmed footage from CMA Fest, you can see some people in the crowd dancing along to the song. Even Bentley could be seen attempting a few dance moves onstage while he sang with Cyrus.

Head below to watch some videos of Bentley and Cyrus’ performance. Check out the second slide in the first post to see one of the videos

It looks like Bentley and Cyrus had a ton of fun!