By Tiffany Smithson Aaron on May 31, 2020
Advertisement 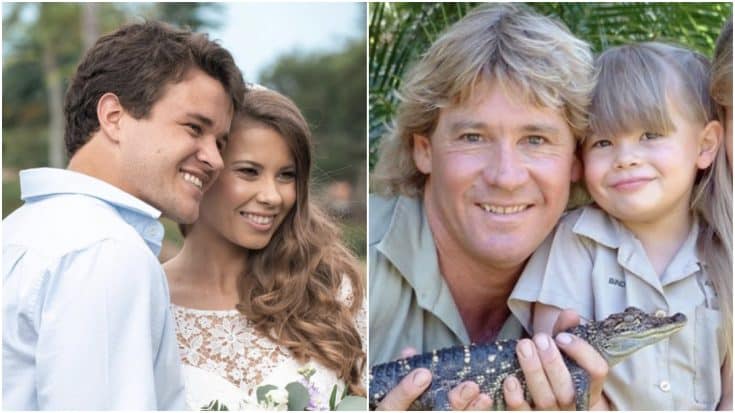 Bindi Irwin, Australian television personality and daughter of the late Crocodile Hunter Steve Irwin, married her longtime love Chandler Powell in March 2020. But, the bride has chosen to keep her maiden name and explained the reason why in a recent interview.

“I’ve kept Bindi Irwin,” she told Entertainment Tonight. “I think that for me personally, after dad [Steve Irwin] passed away it was really important for me to feel close to him, and having his last name means so much to me.”

Chandler said that they discussed Bindi changing her last name, but said that at the end of the day she’s “an Irwin through and through.”

Bindi replied, saying: “Chandler has become an Irwin now. It has become a part of me. Everyone has their own ideas, but the nice thing is that it’s 2020 now, anything works!”

In May 2020, Bindi shared some behind-the-scenes details of her special day on Instagram, including the fact that paparazzi interference forced the couple to make last-minute changes to their ceremony.

“On our wedding day we were finally about to get married and the paparazzi flew over us in a helicopter scaring our wildlife. We had to leave our stunning wedding venue on the African Savannah for their safety. I said goodbye to the place I had dreamed of getting married for so many years,” Bindi wrote. “At that moment I remembered the filming barn where I’d spent much of my life with my family working on Crocodile Hunter and Bindi The Jungle Girl. I knew we could make it work and our zoo crew helped us to move everything inside. I watched love win.”

Since then, Bindi and her husband have welcomed a daughter into the world. They named her Grace Warrior Irwin Powell.

Bindi was 8 year old when her dad died after being pierced in the chest by a stingray in Australia’s Great Barrier Reef. He was 44. Bindi inherited her father’s love for wildlife and took up his conservation causes by hosting “Bindi the Jungle Girl.”