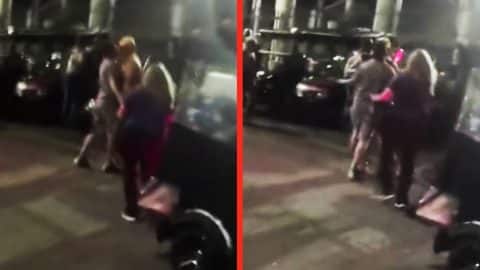 Just moments after this weekend’s race ended, a hostile and angry fan assaulted one of NASCAR’s most notorious drivers as he was leaving the track.

The NASCAR Monster Energy Cup Series continued this weekend at Bristol Motor Speedway in Bristol, Tennessee but an angry mob of fans gathered following the race because of several crashes that happened during the race – and could have endangered multiple other drivers.

Take another look at the crash, which didn't take much to start. pic.twitter.com/gO6W7bW0um

Firstly, Kyle Busch – one of NASCAR’s most-polarizing drivers and strongest personalities – caught the rear end of Martin Truex Jr.’s car and sent him into the inside wall. He then made contact with another car as a result.

Following the race, Busch was quick to accept responsibility for the crash – but even Truex Jr.’s girlfriend called Busch out for his on-track actions.

Omg I can’t believe that just happened. Kyle Busch is a moron

Obviously Kyle Busch didn’t wreck Truex on purpose. But it was definitely his fault.

But that wasn’t all that happened during the race…

On Lap 2, Busch also got caught up in a wreck that involved Truex Jr. and 13 other drivers. He got up into Ryan Blaney’s car and then came to a dead stop in the middle of the track, dragging many other drivers just after things got started.

It was this series of events that had fans riled up and downright angry with him. In a video captured by a fellow angry fan, one bitter man sought out Kyle Busch when he was signing autographs following the race.

The mob of haters converged on the NASCAR driver, who was still dressed up in his bright yellow firesuit. Screaming profanities and insults at him over the issues on the track, one man got up-close and personal with Busch in an incident that turned violent.

Wearing tan cargo shorts and a grey shirt, this dude gets right up in Busch’s face and goes to town, hollering at him over the race and everything that happened. Confronting the driver, the two bump chests a few times while arguing and when Busch turns to walk away, the fan angrily assaults him – shoving him with enough force to make him stumble.

We have just obtained a copy of the video from a trusted source of the incident involving a fan and @KyleBusch that took place after the #BassProNRANightRace at @BMSupdates #NASCAR pic.twitter.com/QcF2slcrOJ

Within seconds of Busch turning around to get involved in what would have been a violent physical altercation, police and security were in the middle of it all and stopped it from escalating further.

Busch has been notorious among NASCAR drivers for years, sometimes having an attitude or flippant demeanor in post-race interviews and the like. He’s one driver that everyone has an opinion on – good or bad.

Watch a video from another angle below and let us know what you think about the issue and Kyle Busch’s driving in the comments.