Blake & Gwen’s Duet, “Nobody But You,” Experiences Sales Surge After Grammys Performance

By Miranda Raye on January 28, 2020
Advertisement 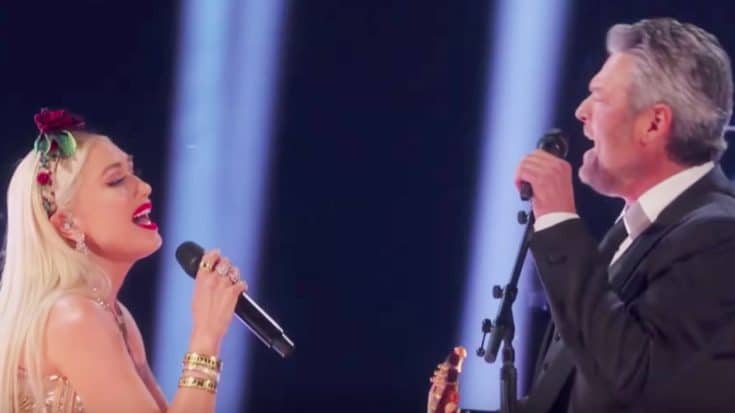 There weren’t many country artists who performed during the 2020 Grammy Awards on Sunday (January 26), but those who did sing left a powerful impression.

Billboard cites initial reports to Nielsen Music/MRC Data that indicate how sales of Grammys-performed songs increased after the ceremony. One of the most notable gains comes from Best Country Song and Best Country Album winner Tanya Tucker, whose song “Bring My Flowers Now” experienced a 411% increase in sales “from a negligible total” after she sang it during the Grammys.

Blake Shelton is another country star who has the Grammys to thank for increased sales. His new duet with his girlfriend, Gwen Stefani, is experiencing a surge in sales after the couple performed the song during the ceremony.

The new song, titled “Nobody But You,” was released in December off of Shelton’s newest compilation album, Fully Loaded: God’s Country. After its release, the song debuted at the ninth spot on the Hot Country Songs chart, making it Stefani’s first Top 10 hit on that chart.

Just days before the Grammys, Shelton and Stefani released a music video to accompany “Nobody But You.” The clip is full of PDA and features an appearance from Shelton’s dog, Betty.

Like the audio version of the song, the music video quickly took off. As of press time, it has over 8 million views after only being out for one week.

With all of this hype surrounding “Nobody But You,” Shelton and Stefani’s Grammys performance was highly anticipated.

The couple didn’t disappoint, and ended up delivering one of the standout performances of the night. Fans rushed to social media to share their thoughts about the song.

Even now, days after Shelton and Stefani sang on the Grammys, fans are still buzzing about their duet.

OKAYYYYYY BUT BLAKE SHELTON & GWEN STEFANI'S PERFORMANCE OF "NOBODY BUT YOU" LAST NIGHT AT THE GRAMMYS ? ? ? ?

Thank You Gwen Stefani and Blake Shelton for your beautiful song! You helped our sadness ?subside and replaced it with LOVE? #GRAMMYs #RIPKobe pic.twitter.com/0A320UmhzO

That excitement shows up in the sales surge “Nobody But You” experienced after the Grammys. Billboard reports the song saw a 91% increase in sales, going up from 4,000 on the day prior to the ceremony to 8,000 afterward.

To understand why the song is experiencing so much success right now, check out part of Shelton and Stefani’s Grammys performance in the video below. At this rate, “Nobody But You” could be one of the biggest country songs of 2020!