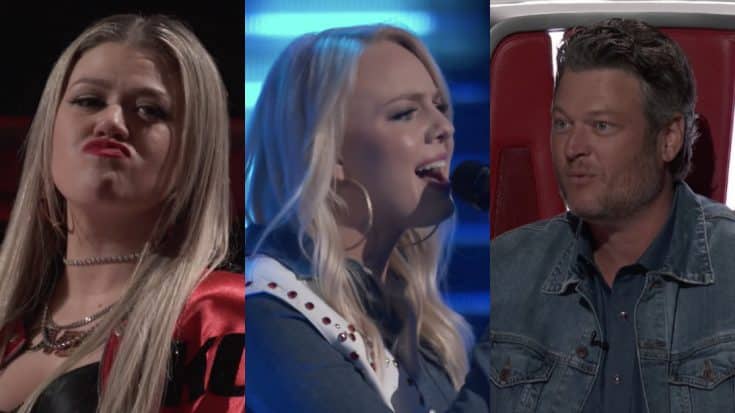 19-year old Rachel Messer pulled out all the stops for her ‘Voice’ Blind audition Monday night (October 1). Messer, who’s from “up a little holler outside of Fort Gay, West Virginia,” wowed the judges with her yodeling skills as she sang Patsy Montana’s “I Want to Be a Cowboy’s Sweetheart.”

While many of her fellow contestants walk a line between different genres, it’s clear that Messer’s place is in country music. Just seconds after she began to sing, coach Kelly Clarkson turned her chair in an effort to secure the smooth-voiced southern belle a place on her team. As Messer sang, Clarkson threatened fellow coach and country star Blake Shelton.

“Don’t you do it!” Clarkson repeatedly told Shelton.

But, Blake eventually turned his chair, unable to resist adding such an authentic country voice to his team. The move prompted Kelly to throw a fit as she fought to prove to Messer that she was as country as Blake.

“Oh my gosh! I can’t stand you. You knew I wanted her,” Kelly pleaded with Blake.

“Not only do I want her, I know what to do with her,” Blake responded. “This isn’t going to be dabbling in country music. She is country. I’m country. This is meant to be.”

Blake turned his attention to Messer and tried to convince her that she belonged on his team because there is still a hunger for real country music.

“You’re the kind of artist that excites me because you honor the history of country music before you take a step forward with it. I’d be honored to work with you,” Blake said.

Without hesitation, Messer joined Team Blake. Messer joins fellow country contestant Dave Fenley who wowed the judges with his rendition of Travis Tritt’s first No. 1 hit, “Help Me Hold On.”

Watch Rachel Messer’s impressive rendition of “I Want to Be a Cowboy’s Sweetheart” in the video below.