By Jennifer Pernicano on June 7, 2018
Advertisement 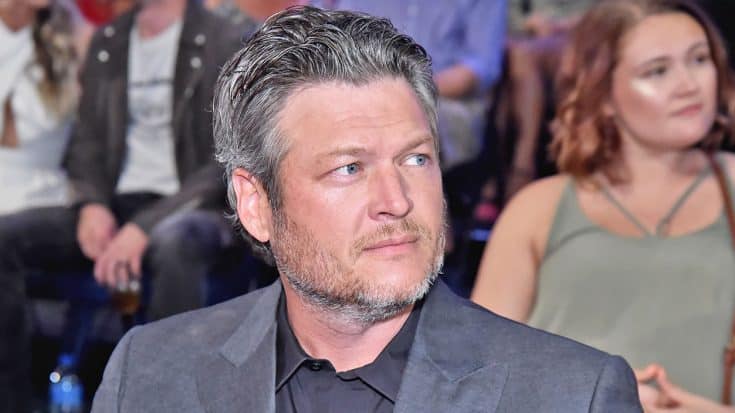 At the 2018 ACM Awards back in April, Blake Shelton and Gwen Stefani made their country music awards show debut. While they didn’t walk the red carpet, they stole some of the spotlight by looking extra cute in the audience all night!

While Shelton was performing his hit single “I Lived It,” cameras cut to Stefani adorably singing along. Fans were thinking they’d get a second dose of this cuteness at the CMT Music Awards on Wednesday night (June 6), where Shelton was up for a couple awards including Male Video of the Year and Video of the Year, both of which he won!

Before he walked on stage to accept his awards, he didn’t give his girlfriend of over two years a hug and a kiss – because she wasn’t there! Viewers first noticed her absence during his performance of “Turnin’ Me On” when cameras didn’t cut to her singing along again.

We didn’t find out until Thursday morning (June 7) where the heck Stefani was. She posted a photo of Shelton on the “red carpet” along with the caption, “Congrats to my favorite …for taking home the biggest honor of the night, Video of the Year, for “I’ll Name The Dogs.” He also took home Male Video of the year — his 10th win in that category!!!”

Congrats ??? to my favorite❤️ @blakeshelton For taking home the biggest honor of the night, Video of the Year, for "I'll Name the Dogs." He also took home Male Video of the Year — his 10th win in that category!!! #cmt #cmtawards #soproudtoknowu #sorryiwasntthere? #vegasrehearsals?? #justagirl @planethollywood Gx

The reason she wasn’t by her man’s side cheering him on was because she was prepping for her Las Vegas residency, which begins June 27!

It’s happening!! My very first Las Vegas residency “Just A Girl” is opening June 27th at @Zappos Theater inside @PHVegas! ? Tix for all 25 dates go on sale this Fri at 10am PT. ♣❤️♠♦️ gx GwenStefani.com

Watch Shelton’s CMT Performance of “Turnin’ Me On” below.