By Jennifer Pernicano on October 4, 2019
Advertisement 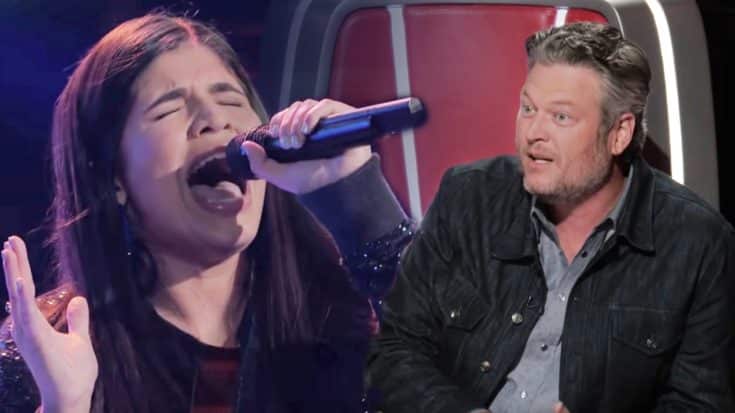 In an upcoming episode of The Voice, we will see 15-year-old Joana Martinez audition for the four coaches, Blake Shelton, John Legend, Gwen Stefani, and Kelly Clarkson.

Luckily for us, The Voice’s official YouTube channel uploaded her audition so we can enjoy it before her episode airs.

She performed The Weeknd’s “Call Out My Name” for her Blind Audition, which isn’t an easy song. A commenter on YouTube even said, “It’s very hard for people to sing the weekend [sic] without sounding like they’re yelling so this was a very tricky song, but she NAILED it.”

It didn’t take long for the coaches to be impressed by Joana’s audition.  Though they didn’t press their buttons right away, you could tell in their faces they were enjoying what they were hearing. After she hit her second big note, Gwen, Blake, and Kelly all turned for her, with Kelly saying, “I mean, she’s so great.”

John was the only coach who didn’t turn, telling Joana, “It was a near-perfect performance.” Blake interrupted in disbelief of his statement.

“Near?! What are you talking about? That was a perfect performance. She was perfect,” he argued to John.

Gwen called her audition “really gorgeous” and Kelly said she would love to have Joana on her team.

Blake wasn’t about to hold back. He said, “Look how you moved us! We just need to navigate this competition. Your God-given talent is already shining through. Come with a coach who gets three people in the finale last year! Let’s do that!”

The video cuts off before she chooses which coach’s team she wants to join, so we will all have to tune in next week to find out! In the meantime, watch her audition below.