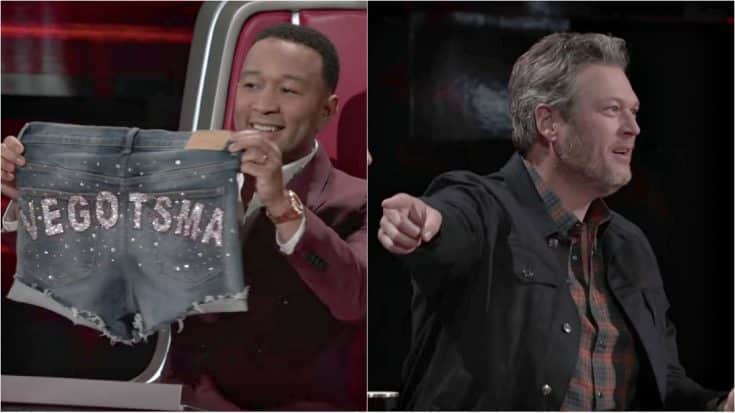 PEOPLE has named its 2019 “Sexiest Man Alive” and nobody was more excited about it than former title holder Blake Shelton. Shelton had the honor of crowning his fellow Voice judge John Legend during the show’s live playoff round results show Tuesday night.

“Ladies and gentlemen. The man, the myth, the Legend,” Shelton said as he pointed to Legend before yelling, “The 2019 Sexiest Man Alive….John Legend!”

After the crowd’s applause died down, Shelton presented Legend with a bedazzled pair of jean shorts with the acronym VEGOTSMA.

“You already came into this show with an EGOT,” Shelton said, referencing the fact that Legend is one of only 15 entertainers to have won all four of the industry’s highest honors: an Emmy, Grammy, Oscar and Tony. “Then you won The Voice and it became a VEGOT. Now you have a VEGOTSMA.”

When asked if he had anything to say in response to being named “Sexiest Man Alive,” Legend thanked PEOPLE before turning his attention to Blake Shelton. “Mostly I want to thank Blake Shelton. I sat next to him for the last few months and I learned his sexy ways. I observed every move he made, every utterance that came from his mouth and I think some of it rubbed off on me.”

In addition to being an award-winning musician, Legend is also a proud father to kids 3½-year-old Luna, and 18-month-old Miles. He is also the husband of supermodel Chrissy Teigen.

For the first time in the award’s history, the honoree will grace two different PEOPLE magazine covers. See the covers below and pick up your copy on newsstands Friday.