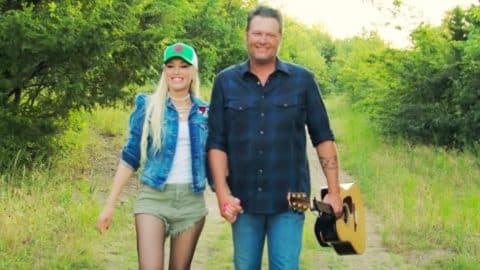 Hot off the heels of “Nobody but You” reaching #1 on the Country Airplay chart, Blake Shelton and Gwen Stefani announced their plans to release another duet.

The song, titled “Happy Anywhere” is the couple’s fourth collaboration. Its predecessors are 2016’s “Go Ahead and Break My Heart,” 2017’s “You Make It Feel Like Christmas,” and 2019’s “Nobody but You.”

Shelton first teased “Happy Anywhere” with a social media post on July 20. “Real excited to share this one with y’all and honored I was able to talk @gwenstefani into doing another song with me!” he said. He announced the song’s release date as July 24.

Real excited to share this one with y’all and honored I was able to talk @gwenstefani into doing another song with me! #HappyAnywhere out THIS FRIDAY! Link in bio to pre-save!

In a press release, Shelton said he felt now was the perfect time to release “Happy Anywhere” because of this year’s circumstances:

“…man, there’s never been a better time for ‘Happy Anywhere,‘” he said. He went on to talk about how everyone has been trapped at home for most of the year, saying, “…hopefully we’ve been doing that with somebody that we really love and enjoy being around. That’s what happened with Gwen and me this summer — and this entire year.”

Written by Ross Copperman, Josh Osborne and Matt Jenkins, “Happy Anywhere” spoke to how Shelton and Stefani have felt about life and their relationship in this trying time.

Your heart will melt when you hear the couple sing romantic lines such as “But since I met you, I swear I could be happy anywhere” and “My home’s wherever your heart is.”

On Thursday (July 23), Shelton participated in a livestream to speak more about the song. During that livestream, Warner Music Nashville’s Shane Tarleton shared a few details about the music video, saying that it was filmed by Stefani’s brother, Todd, on Shelton’s property in Oklahoma. Tarleton said the music video also contains old videos Stefani had saved on her phone.

The official music video for “Happy Anywhere” dropped a few hours after the song was released. It features so many clips of Shelton and Stefani being affectionate toward one another!

Watch the music video for “Happy Anywhere” below and let us know what you think. Shelton and Stefani may have another #1 song on their hands here!