Blake Shelton & Gwen Stefani Share New, Acoustic Version Of “Nobody But You” 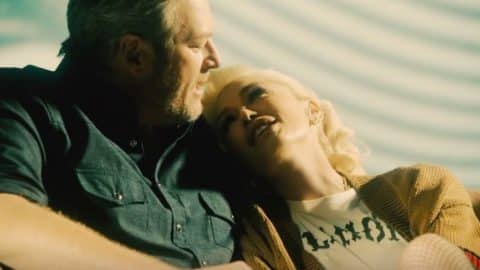 In December, Blake Shelton and Gwen Stefani released their third duet, titled, “Nobody but You.”

The song was an instant success. It eventually went on to become a number one song, making it Stefani’s first number one in country music.

Shelton and Stefani also released a PDA-filled music video for “Nobody but You.”

The couple has since united several times to perform “Nobody but You” live. Their first live performance took place during the Grammy Awards, and resulted in a 91% increase in the song’s sales.

Since then, Shelton and Stefani have joined one another to perform their duet at their respective shows. They first sang it during one of Stefani’s Vegas residency shows, then later joined forces to sing it again at one of Shelton’s concerts.

Friends, heroes, AND… @GwenStefani! Y’all never know what might happen on the #FriendsAndHeroesTour! Link in story!

Even though “Nobody but You” has been around for several months now, it remains one of the hottest songs in country music. So Shelton and Stefani decided to share a new rendition of the song for their fans to enjoy.

The couple announced they would be releasing an acoustic version of the song on Friday (March 20). That day has arrived, which means the new rendition of “Nobody but You” is here!

With a more stripped down arrangement, the acoustic “Nobody but You” draws your focus to Shelton and Stefani’s vocals. Something about the setup makes the performance seem more raw and real.

Listen to the new, acoustic version of “Nobody but You” below to see what we mean.

Once you finish, let us know which version of the song you enjoy most. We can’t choose between the two!