Blake Shelton, Gwen Stefani Sing Duet “Nobody But You” At Grammy Awards 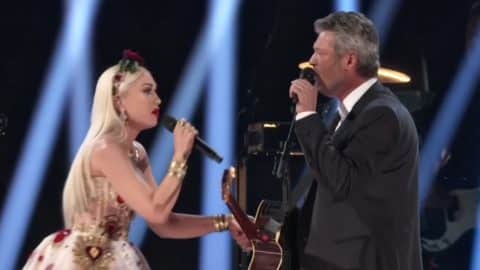 Blake Shelton and his girlfriend of four years, Gwen Stefani, took to the stage during Sunday night’s Grammy Awards show to perform their latest single, “Nobody But You.”

The couple released the video for the song on January 21, but hadn’t performed it live until the Grammys. Fans anxiously awaited the live performance after seeing the PDA-filled music video debut that showed Blake and Gwen sharing intimate moments on the couch, in a car, at dinner, and during other moments from their day-to-day lives.

Their live performance of “Nobody But You” did not disappoint. Blake and Gwen’s chemistry was off the charts as they sang the heartfelt lyrics:

Blake looked sharp in a black suit while Gwen stunned in a beautiful ballgown. At one point during the song, Blake stopped playing guitar and reached for Gwen’s hand and held it through the remainder of the song.

“Nobody But You” is featured on Shelton’s latest album Fully Loaded: God’s Country and garnered more than 3.5 million plays since the album’s release in December 2019. The album’s title track, “God’s Country,” was nominated for Best Country Solo Performance, but was beat out by Willie Nelson’s performance of “Ride Me Back Home.”

“Nobody But You” is the second song Blake and Gwen have collaborated on. In 2016, the pair teamed up for “Go Ahead and Break My Heart,” a song featured on Blake’s 10th studio album, If I’m Honest. Shelton and Stefani debuted their first duet on The Voice.

Watch Blake Shelton and Gwen Stefani’s live performance of “Nobody But You” at the Grammy Awards below.