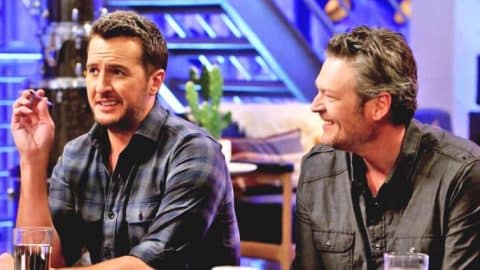 Recently, Luke Bryan and his wife, Caroline, appeared in some commercials for Jockey. One of the ads shows Caroline bringing a box of Jockeys over to her husband.

She showed Luke several pairs of underwear, including one bright blue pair.

“I know you like me in them,” Luke said to her in a flirty tone.

Many people were fans of Luke’s new role as a Jockey spokesperson. But his good friend Blake Shelton jokes that he doesn’t have such postive feelings about the whole thing.

CMT’s Cody Alan recently interviewed Shelton and asked what he thinks of his former ACM co-host’s new underwear commercials. “Does the thought of Luke Bryan in underwear disgust you?” he asked.

Shelton poked fun at his buddy, saying,”Well, it is disgusting, but it’s not surprising.”

He took another playful jab at his longtime friend by making fun of his hygiene:

“Luke just seems like one of those guys that walks around his house in his underwear all day with pee stains on them. He just seems like that kind of guy, doesn’t he? If he doesn’t have to put clothes on, he probably doesn’t.”

Shelton probably feels like he has the authority to speak on this matter since he was a former spokesperson for Gildan underwear. All of his ads were hilarious! You can revisit one of them in the video below.