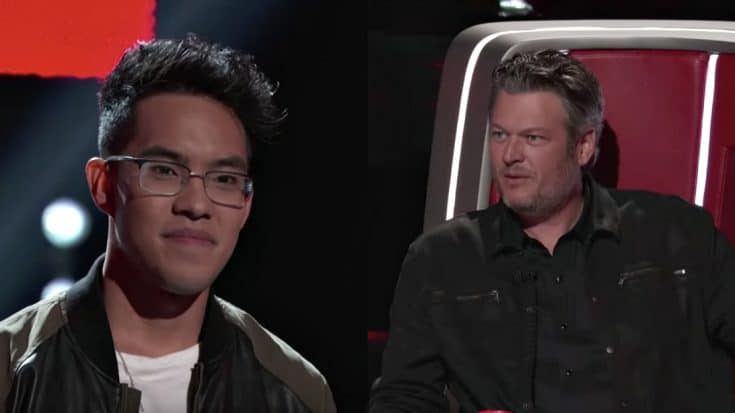 Is it really possible to predict a reality singing show winner during the earliest stages of the competition? We think so! After all, Simon Cowell predicted that Carrie Underwood would not only win the fourth season of American Idol, but that she would become the best-selling Idol winner ever. He was right, and who are we to argue with greatness?

We’ve rarely heard such bold and blatant predictions on The Voice, but there was no denying that one contestant deserved such praise after his incredible Blind Audition during Monday night’s (March 4) episode.

Jej Vinson, a 22-year-old native of the Philippines, moved to Los Angeles to pursue the American dream. His unique and perfect rendition of “Passionfruit” by Drake had all of the coaches fighting over each other to land him on their team. As soon as Vinson’s performance wrapped, Adam Levine declared, “You’re a better singer than all of us.”

@jejvinson had @kellyclarkson running around her chair! ? Is he an early contender to win #TheVoice?

“I’m excited that you got four chairs, because you deserve it!” coach John Legend told the talented singer. Adam Levine offered the only criticism of the performance saying that it was perhaps too perfect. “There’s almost something surgical about how perfectly placed all of those runs are.” Levine added, “If I were your coach, I would want to get you to a place where people can feel you as well as they can hear you.”

It was coach Blake Shelton who made the bold prediction that Jej Vinson will win season 16 of The Voice. “I think everybody here’s a little bit nervous talking to you right now. We all feel like we’re looking at the winner of The Voice this season.”

Kelly Clarkson took it just a little farther when she assured Vinson that she was the coach that could lead him to that win, despite the fact that she has mentored few guys during her short run on the show.

“I can win this show with you. You’re incredible, man!” Clarkson said.  “If you want to be strategic…I have one male. He’s in a trio with two girls and they’re siblings. They all have a plethora of guys. I would just love the opportunity to work with you.”

Seemingly unaware of the extent of his talent, Vinson was overwhelmed by the praise and stood motionless while listening to the feedback. When it came time to choose whose team he was going to join, Vinson shocked everyone by choosing Team Kelly Clarkson.

Do you think Kelly can earn her third straight win with Jej Vinson? Check out his full Blind Audition below and let us know what you think!