Blake Shelton Shares How He Has Changed Since Marrying Gwen Stefani 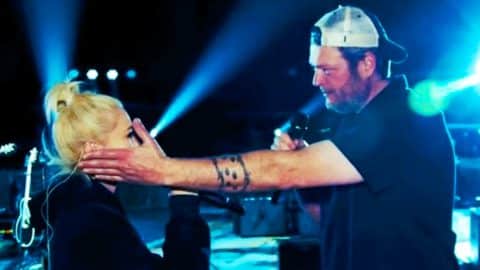 Blake Shelton and Gwen Stefani got married on July 3, 2021. The couple had been together for nearly six years by the time they finally tied the knot during a small ceremony on Shelton’s property in Oklahoma.

Stefani wore two Vera Wang dresses on her wedding day. One was for the ceremony and the other was a party dress she wore to the reception. Her ceremony veil had her and Blake’s names embroidered on the bottom. The names of Stefani’s three sons were also embroidered on the veil.

Voice host Carson Daly served as the officiant during the ceremony, where Shelton sang a song he wrote for Stefani.

Even though Shelton and Stefani have only been married a few months, Shelton can already tell that marriage has changed him. While hanging out with his fellow Voice coaches, he shared one thing that is different about him now that he and Stefani are married.

Prior to the start of the Season 21 battles, Shelton handed a box of tissues to new coach Ariana Grande. He did this because he knew how hard it would be for her to eliminate one of her team members at the end of each battle.

“I’ve been thinkin’ about you,” Shelton told Grande. He then made a comical comment, saying, “After this season you won’t ever need these again. You’ll get over it. You’ll become callous like us three.”

“Look at this guy. There is a heart in there,” Legend teased.

Shelton said he thinks this newfound sense of kindness is a result of his being married to Stefani. “Look, I’m married now. I’m soft. I’m getting softer,” he joked.

But don’t worry…even though Shelton has a softer side now, he hasn’t lost his unfiltered sense of humor! Enjoy some of his most hilarious moments on Season 21 so far by watching the outtakes video below.